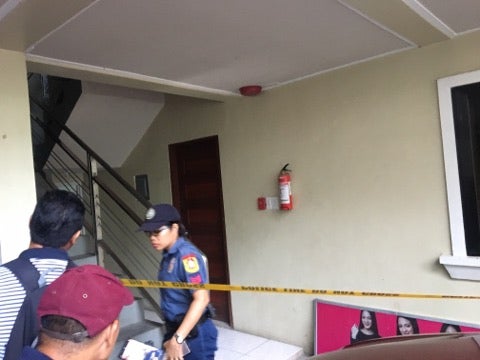 The apartment where Juvilyn Bardiaga, 24, an assistant store manager in San Nicolas, Ilocos Norte, was found dead is cordoned off while an investigation is ongoing. (Photo by Leilanie Adriano)

LAOAG CITY –– A 26-year-old assistant store manager of Save More Market in San Nicolas, Ilocos Norte was found dead and half-naked on Tuesday morning inside her apartment.

The victim was identified as Juvilyn Bardiaga from Buenavista village in Santiago town, Isabela province.

Police Major Paul Benedict Parado, chief of the San Nicolas municipal station, said during a radio interview that footage of a closed-circuit television installed near the area showed a man forcing his way through the window of the apartment’s restroom on Monday evening.

Parado said the suspect, who wore a jacket and a face mask, left the apartment also through the restroom’s window about an hour later.

The victim’s board mates said they heard someone yelling for help but dismissed it as a quarrel.

Investigators said the victim has been renting the place for about seven months.

The San Nicolas police and scene of the crime operatives said the suspect left a condom on the victim’s face and wrote the message “R.I.P.” at the apartment’s glass window.

Investigators said Bardiaga’s body would be subjected to post mortem examination to determine if the victim was raped.