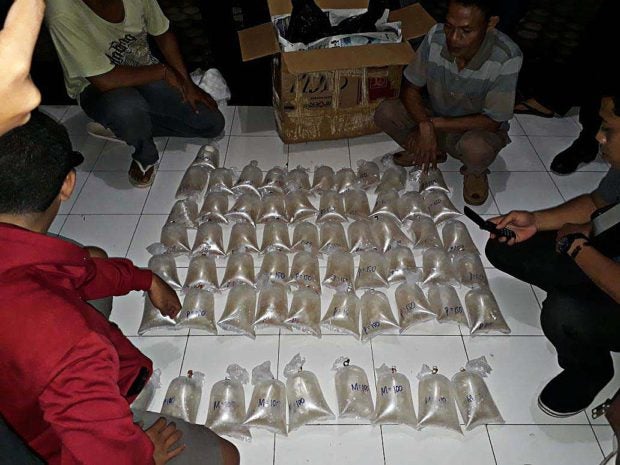 BATAM, Indonesia — Maritime Affairs and Fisheries Minister Susi Pudjiastuti has called on Singapore to combat the smuggling of lobster larvae into the city-state.

Susi said Singapore should reject any shipments of lobster larvae that do not have a health certificate issued by Quarantine Management System (QMS).

“The lobster larvae are smuggled into Singapore and then they are exported to Vietnam. We want the Singapore government to reject [the commodity],” Susi said in a press conference in Batam, Riau Islands, on Monday.

“Singapore should not have allowed live animals without health certificates into the country. How can Singapore’s quarantine office allow them to enter? […] I really do not understand.”

Susi made the statement after Lampung and Jambi Police thwarted a smuggling attempt of lobster larvae from Batam to Singapore.

Earlier this month, the National Police foiled the smuggling attempt of 113,412 lobster larvae in Jambi and arrested two Singaporean nationals, who were the alleged buyers, four days later on July 6.

Susi said that since January to July, the police have thwarted efforts to smuggle some 3.16 million lobster seeds worth Rp 474.4 billion in 39 separate cases. Meanwhile, from 2015 to 2019, the police investigated 263 cases of smuggling attempts involving more than 9.82 million lobster larvae worth Rp 1.3 trillion.

She added that she would meet with the Singapore ambassador in Jakarta to talk about the issue. She explained that lobster larvae were caught by fishermen who used light traps.

“Lobster larvae will crowd in light. Farmers sell them from Rp 10,000 to Rp 50,000 per larvae. In Singapore, the price could reach hundreds of thousands of rupiah. When they are larger, they could cost millions [of rupiah] each,” she added.

Susi said the smuggling of lobster larvae had reduced the lobster population in Indonesian waters.