Only upon arrival at his destination did anyone suspect he had the highly deadly and infectious Ebola virus. 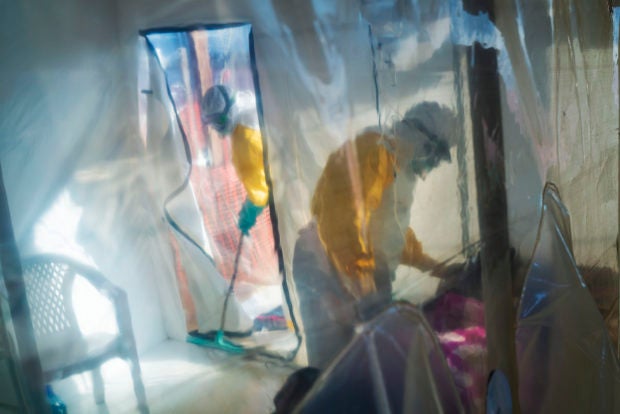 In this photograph taken Saturday 13 July 2019, health workers wearing protective suits tend to to an Ebola victim kept in an isolation cube in Beni, Congo DRC. The Congolese health ministry is confirming the country’s first Ebola case in the provincial capital of 2 million, Goma, some 360 kms ( 225 miles) south of Beni. More than 1,600 people in eastern Congo have died as the virus has spread in areas too dangerous for health teams to access. (AP Photo/Jerome Delay)

During his trip to Goma, the 46-year-old preacher managed to pass through three health checkpoints aimed at stopping those who are sick with Ebola and contagious.

Now health authorities along his route are trying to hunt down all those he may have been in contact with after the man became Goma’s first confirmed Ebola case on Sunday.

It’s a crucial task to contain the spread of Ebola in Goma, home to more than 2 million people and the largest city to confirm a case of the disease since the epidemic here began nearly a year ago.

“It’s the door of this region to the rest of the world,” said Dr. Harouna Djingarey, infectious disease program manager for the World Health Organization’s regional office in eastern Congo.

“From here you can fly to everywhere in the world. If we don’t have the control over the contacts, some high-risk contacts may fly, take a plane and go somewhere.”

Health experts have long feared that the disease responsible for killing nearly 1,700 people since August would eventually make its way to Goma.

The city is an important transit point for the region and beyond and a bustling trade hub drawing travelers from throughout Congo’s east.

Speaking at a U.N. meeting in Geneva on the outbreak, Congo’s minister of health, Dr. Oly Ilunga, called the spread of Ebola to Goma “a warning.”

The head of the World Health Organization, Tedros Adhanom Ghebreyesus, said the development was so worrying that he was reconvening the agency’s emergency committee as soon as possible “to assess the threat of this development.”

The committee has been convened three times in the past to decide whether or not the epidemic warrants being declared a global emergency; it has declined every time to do so. WHO’s Dr. Michael Ryan, who is directing the agency’s Ebola response, said the meeting would be held this week.

Ryan said 30 contacts in the Goma case had already been vaccinated and the remaining 30 would be vaccinated on Tuesday.

Congo’s health ministry sought to reassure people that the situation was under control, though some already were on edge after learning about the sick pastor.

“God help us if Ebola is now in Goma,” said Baudouine Rudahigwa, 30, who immediately feared the case could prompt restrictions against her and fellow residents. “My children are now on alert that they can’t greet or play with others. They are washing their hands all the time.”

The health ministry said the pastor, who has not been identified, had preached at seven churches during his evangelical trip to Butembo, one of the towns hardest hit by Ebola in Congo.

Last Tuesday the preacher fell ill and was seen at home by a nurse before he began his bus trip to Goma.

Somehow he was able to evade detection during the roadside health checkpoints, when all travelers get off the bus, wash their hands and have their temperature taken.

“During the checks, he did not seem to show signs of the disease. In addition, at each checkpoint he wrote different names and surnames on the lists of travelers, probably indicating his desire to hide his identity and state of health,” the ministry said.

Upon arrival in Goma he sought medical treatment and health workers immediately suspected he had Ebola, which was later confirmed by a lab test.

He was transferred back to Butembo on Monday in accordance with a decision by Congo’s Ministry of Health, according to Doctors Without Borders, which runs the Ebola clinic in Goma where he was diagnosed.

Congolese health officials have been preparing for months for the possibility a case would emerge in Goma and as a result more than 3,000 frontline health workers already have been vaccinated. Neighboring Rwanda also has taken measures to stop the disease from spreading across its border.

While the epidemic has become the second deadliest in history, its spread to neighboring African countries has been mostly contained.

A family who fell ill while in Congo did cross the border into neighboring Uganda where two of them then died. However, no one they came into contact with fell ill during the 21-day incubation period after the exposure.

The World Health Organization has said the risk of the outbreak spreading beyond Congo’s borders is low, though efforts to contain it have been compromised by people failing to comply with health authorities.

Some who were considered high-risk contacts and urged not to travel have left the area, including a woman who made her way to within 70 kilometers (about 40 miles) of Congo’s border with South Sudan.

WHO and partners have also said the response has been hampered by a lack of resources, repeatedly citing a $50 million gap in its Ebola containment plan. /gsg

Read Next
Scientists close in on blood test for Alzheimer’s
EDITORS' PICK
Beyond the Chocolate Hills: A farm-to-table, heritage culinary adventure of Bohol
MyCitiHomes premiers PH’s first 3-star certified BERDE District residential development
‘Crash Landing on You’ couple confirms pregnancy
Enrile contracts COVID-19: ‘To my critics and enemies, I am not going to die yet’
Metro Manila’s COVID-19 positivity rate jumps from 3.9% to 5.9% — OCTA
House energy committee chair Arroyo bats for cheap electricity
MOST READ
Enrile contracts COVID and snipes at critics, foes: ‘I am not going to die yet’
Duterte: It was correct for Bongbong Marcos to ‘decline’ presidential debates
Russia steps up missile strikes on Ukraine as G7 leaders gather
PH firm partners with US corporation to set up weapons assembly in Bataan
Don't miss out on the latest news and information.