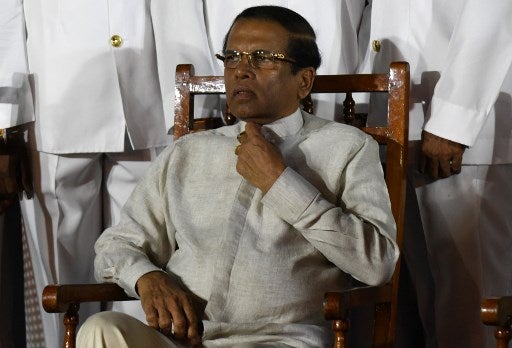 Sri Lanka’s President Maithripala Sirisena waits next to Navy officers for a group photo during a ceremony commissioning P 626 ship, US gifted to the Sri Lankan coastguard at the main port in Colombo on June 6, 2019.  AFP

The statement comes amid a nationwide narcotics crackdown, with President Maithripala Sirisena aiming to reintroduce capital punishment for drug offenses.

Authorities have said local jihadist group National Thowheeth Jama’ath (NTJ) were responsible for the suicide bombings in churches and hotels that killed at least 258 people in April. The attacks were later claimed by the Islamic State group.

Sirisena’s office said the day after the bombings that local terrorists and international terror groups were responsible for the attacks.

But in a statement issued by his office Monday, Sirisena said the attacks “were the work of international drug dealers.”

“Drug barons carried out this attack to discredit me and discourage my anti-narcotics drive. I will not be deterred,” he said.

Sirisena is waging a battle against efforts by his governing coalition in parliament to abolish capital punishment, which has been subject to a moratorium since 1976.

Sri Lankan courts routinely hand down death sentences to drug offenders, murderers and rapists but it is automatically commuted a term of life imprisonment.

The president has marshalled public support for an end to the moratorium, saying that hangings would deter the illegal drugs trade.

“If the government brings legislation to abolish capital punishment, I will declare a day of national mourning,” Sirisena said in the statement, adding that public opinion favoured hanging condemned criminals.

He said the leading Buddhist monk Omalpe Sobitha had advised him to resume hangings and not to abandon his war on narcotics.

Sri Lanka’s Supreme Court earlier this month suspended Sirisena’s moves to hang four drug convicts. The court banned any executions until it rules on a petition seeking a declaration that hanging breaches the country’s constitution.

The next hearing in the case is in October.

Sri Lanka’s last hangman retired in 2014, but officials said they had selected two new executioners from a pool of candidates. /ee