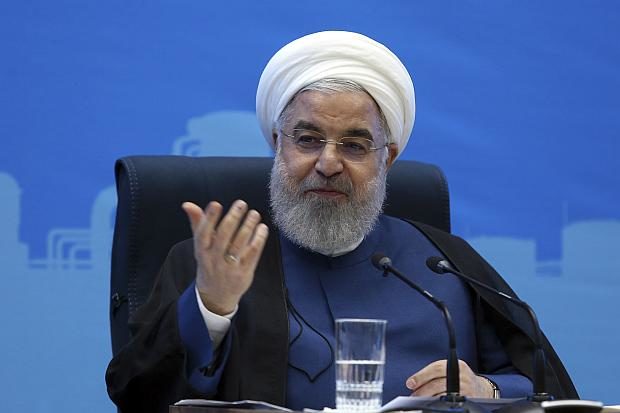 In this photo released by the official website of the office of the Iranian Presidency, President Hassan Rouhani speaks in a meeting during his provincial tour to the North Khorasan, Iran, Sunday, July 14, 2019. Rouhani said his country is ready to negotiate with the United States if Washington lifts its economic sanctions. (Photo from Iranian Presidency Office via AP)

BRUSSELS — European Union nations were looking to deescalate tensions in the Persian Gulf area on Monday and call on Iran to stick to the 2015 nuclear deal, despite the pullout of the United States from the accord and the re-imposition of U.S. sanctions on Tehran.

Dutch foreign minister Stef Blok said that “it is still not too late, but Iran really has to stick to its obligations.”

Iran recently began surpassing uranium enrichment limits set in its 2015 nuclear deal, saying these moves can be reversed if the other parties to the agreement — Germany, France, Britain, China, Russia, and the European Union — come up with enough economic incentives to effectively offset the U.S. sanctions.

But EU foreign ministers first and foremost want to get Iran to respect the terms of the deal again.

“All these gestures are really raising doubt about intentions” of Tehran, said Linas Linkevicius, the foreign minister of Lithuania.

“The Middle East is already one of the most unstable regions in the world, but if the different parties were armed with nuclear weapons it would represent an existential threat to mankind,” Hunt said.

The leaders of the UK, France and Germany, signatories to the nuclear deal, called for an end to the escalation of tensions in the region.

At their regular monthly meeting, the EU foreign minister will also look to drum up further support for the bloc’s barter-type system to trade with Tehran and get around possible U.S. sanctions. Ten nations are already on board with the idea.

Iran has said it needs improved economic ties with Europe since the United States has re-imposed harsh sanctions on Tehran’s oil exports, exacerbating an economic crisis that has sent its currency plummeting.

Tehran said Sunday it is ready to negotiate with the United States if Washington lifts its punishing economic tensions.

President Hassan Rouhani’s official website quoted him as saying, “The moment you stop sanctions and bullying, we are ready to negotiate.”

And the day before, Britain’s top diplomat said the U.K. will facilitate the release of a seized Iranian tanker if Iran can provide guarantees the vessel would not breach European sanctions on oil shipments to Syria.

Hunt’s remarks late Saturday could help de-escalate tensions. In apparent retaliation for the seized tanker, Iranian paramilitary vessels tried to impede the passage of a British oil tanker through the Strait of Hormuz, only turning away after receiving “verbal warnings” from a British navy vessel accompanying the ship, the British government said.