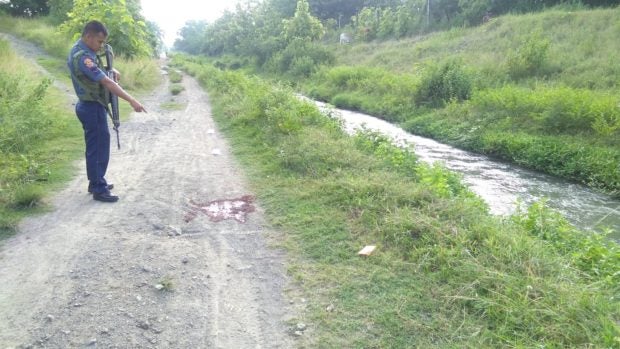 A policeman shows the spot where Eusebio De los Reyes, 54, was found dead after unidentified gunmen attacked him on Monday (July 15). PHOTO COURTESY OF CORDON POLICE

CORDON, Isabela–A 54-year-old farmer was gunned down by two unidentified motorcycle-riding assailants here on Monday (July 15), according to police.

Investigators said farmer Eusebio De los Reyes was driving a tricycle to his farm when the gunmen shot him with a .45 caliber gun.

De los Reyes died instantly while his wife, who was in the tricycle, was unhurt but witnessed her husband die.

Police said the motive could be a land dispute or personal vendetta. VILLAMOR VISAYA/TSB