Aquino finds self in eye of storm 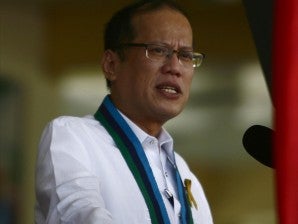 In the wake of Tropical Storm “Sendong,” President Benigno Aquino III has found himself in the eye of another storm.

Users of social networking sites slammed the President after sexy television host Valerie Concepcion revealed in her Twitter account that she performed in a Christmas party of the Presidential Security Group (PSG) at Malacañang Park on Sunday night, which was attended by Mr. Aquino.

The party took place as thousands of people in Northern Mindanao were struggling to cope with the aftermath of the storm’s wrath.

The criticisms of the President came after Concepcion tweeted: “Done w/ work…Tnx for having me..:) It was nice to see Pres. P-Noy laughing at my jokes & enjoying my performance…#Malacanang #PSGNight.”

Many users took the President’s presence at the party as a sign of insensitivity to the plight of Sendong victims. Others defended Mr. Aquino. The flurry of reactions catapulted the term “PSG” to the list of trending topics on Twitter Philippines.

Concepcion later deleted her entry concerning Mr. Aquino’s presence at the party. She also issued an apology to those offended by her tweets and defended the President against the criticisms.

The swell of criticisms included one from user Mang Pandoy who said: “Apparently, he was just being heartless, callous and cruel.”

“Noynoy can cancel an Asean meeting, but can’t cancel a PSG party to attend to CDO disaster,” said user benigno, apparently referring to an occasion when Mr. Aquino missed one day of a meeting of the Association of Southeast Asian Nations in Indonesia because of problems at home.

Others said it was understandable for Mr. Aquino to be at the party of his security aides.

User rootech said there was nothing wrong going to the party because it was for people who were “handang mamatay para sa’yo” (ready to die for you).

Presidential spokesperson Edwin Lacierda said that Mr. Aquino stayed at the party just long enough to “say hello” to the PSG members and their families, most of whom had flown in from the provinces.

“The President mentioned to (PSG chief) Colonel Ramon ‘Chito’ Dizon that he wouldn’t be staying long in deference to the Mindanao flood,” Lacierda said.

He said Mr. Aquino “just sat and watched for a few minutes…and then he left immediately.”

Communications Secretary Ricky Carandang said the PSG had considered canceling the party owing to the Mindanao tragedy but it was too late because family members had already arrived.

He said reports about the President’s presence at the party were “exaggerated” and “taken out of context.”

Both Carandang and Lacierda said Mr. Aquino had in fact canceled Monday night’s Christmas party for his Cabinet “in deference to the Mindanao flooding and Mindanao casualties.”

Communications Secretary Herminio Coloma Jr., head of the Presidential Communications and Operations Office,  said: “Yes, it’s true the President was there but let us place it in the proper context. It was a celebration by the PSG, by soldiers whose role is to protect the life of the President 365 days a year…It was to give them a bit of morale and welfare.”

Speaking at the Kapihan sa Diamond Hotel forum, Coloma said: “It was a simple Christmas celebration of soldiers. It was not the President who was celebrating. It was just his expression of solidarity and thanks.”

Coloma appealed to the public for understanding. “It was maybe just two hours or an hour of his time. He only listened to two or three songs performed by Valerie (Concepcion). Maybe we can give the President a break,” he said.

Mr. Aquino is due to visit storm-ravaged areas in the cities of Cagayan de Oro, Iligan and Dumaguete Tuesday. With a report from Jaymee T. Gamil and AFP