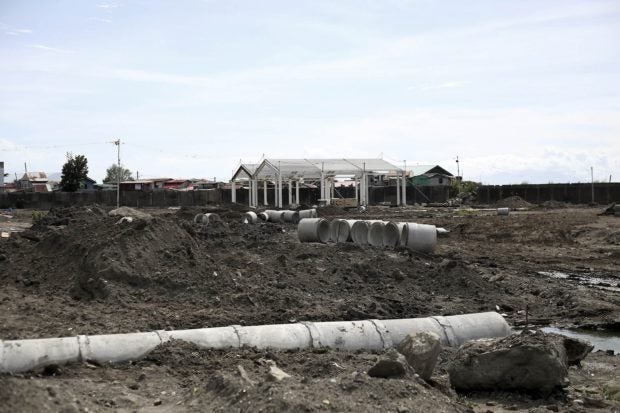 DRAINAGE SYSTEM To prevent flooding at Sangley airport, the Department of Transportation, which implements the project, is installing a drainage system and a pumping station, as well as flood-control channels midway of the 2.4-kilometer stretch of the runway. —PHOTOS BY RICHARD A. REYES

CAVITE CITY, Cavite, Philippines — For a city that was once the center of international trade, a rising airport could finally be its long-needed push to stir a stagnant economy.

Sari-sari store owners Edgar and Ludy Hernandez would not mind the little discomfort from the whirs and barks of planes taking off if these would mean more people buying from them and therefore better business.

“It would be harder to sleep, but maybe it’s about time they put up something like this for the city to move forward,” Edgar said.

The Hernandez couple lives right outside Sangley Naval Air Base, a good portion of which (3.6 hectares) the government is repurposing into a domestic airport.

President Rodrigo Duterte has ordered the airport open by November as he rushes to ease the bigger problem of congestion at Manila’s Ninoy Aquino International Airport (Naia).

Since the new airport can only accommodate charter flights and turboprops for now, city administrator Allison Santiago said it might take a while before the city can actually feel its economic impact.

Yet, he said, the city government was already “studying” its local revenue code to levy landing fees and new taxes.

Sooner or later, Santiago said, the airport could draw investors, drive up real estate values, and invite tourists to this city, which has lagged far behind its neighboring towns of Kawit and Rosario.

“What comes next to an airport? Access roads, land reclamation. That’s what the city needs,” he said.

Cavite City has a total land area of 1,238.63 ha, about half of which are Corregidor and adjacent islands geographically closer to Bataan province.

A big chunk of the mainland, which is basically a strip of land sandwiched between Manila Bay to the west and Canacao and Bacoor Bays to the east, is being occupied by the Sangley naval base.

“Sangley” came from the word “xiang li,” the Chinese merchants who traded goods across Manila Bay, long before the Spaniards docked their ships in Cavite City.

In 1571, the colonizers found better use of the peninsula by building a shipyard that paved the way for the Manila-Acapulco galleon trade over the next 327 years. No wonder people in this part of Cavite adopted Chavacano, a Spanish pidgin spoken until today by a few old families when they want to keep their conversations private.

The mooring bay was eventually named after the “sangleys” and Cavite City became the Asian terminal of international commerce. When the Americans took over in 1898, they turned Sangley into a military reservation that saw many more battles until 1971.

There were even US submarines and naval destroyers docking at Sangley, Santiago recalled.

He said the Americans brought the city to life. Locals opened up dress shops that made soldiers’ uniforms, rented out rooms “by the hour,” and ran laundry shops, diners, bars and grocery stores that sold imported goods.

Cavite City, the province’s capital until 1954, had the only theater in Cavite in the 1950s.

“It was really a big drop in the economy when the Americans left,” Santiago said. In a 1971 article by the New York Times, Fidel Dones, a former mayor, was quoted as saying that the city had turned into a “ghost town.”

Without a single industry built or a subdivision developed, Cavite City remains dependent on its internal revenue allotment of around P400 million or just about how much a single barangay in Manila City makes.

Santiago said fast foods eventually closed shop after missing its target sales with the same crowd of customers dining over and over.

“Cavite City grew only by population and not by its land or income,” said Capt. Marc Aerone Paul Imperio, who spoke for the Naval Installation Command at Sangley.

There are still retail businesses, like the Hernandezes’, around the base, but the city’s work force found more steady jobs inside economic zones in Rosario.

Without any more land to offer the investors, Santiago said the city’s economy is “at a dead end”—unless the government starts reclaiming Manila Bay.

Part of a 2007 executive order, issued by then President Gloria Macapagal-Arroyo, to convert Sangley into an international logistics hub was directed at the Philippine Reclamation Authority (PRA) to provide a “significant expansion district” for the city through reclamation projects.

Santiago said the PRA previously approved the reclamation of 1,300 ha of Manila Bay facing Bataan, but this was stopped when nongovernmental groups warned of massive flooding.

The Canacao and Bacoor bays, on the other hand, are heavily silted that only the shallow draft vessels of the Navy are allowed to dock, Imperio said.

Jesus Crispin “Boying” Remulla, who just finished his term as governor, said the government might need to elevate the Sangley airport runway by three to five meters to keep the water off, especially during high tide. Noveleta, currently the only route to Cavite City, is already below sea level, he pointed out.

To prevent flooding at the airport, the Department of Transportation (DOTr), which implements the Sangley project, installed a drainage system and a pumping station.

Project management officer Gil Pamatmat said workers had improved the drainage system connected to the Navy housing area and put flood-control channels midway of the 2.4 kilometer-stretch of the airport runway.

They have also installed culverts in the building areas and passenger terminal.

When DOTr officials inspected the airport construction in June, they noted that the floodwaters from two straight days of rain had receded. The drainage system must be working, they surmised.

The DOTr also plans to put up a wharf for a ferry service, but local officials doubted its viability, given the relatively small passenger traffic from general aviation.

In the 1990s, a ferry company operated between Sangley and Metro Manila, but it closed down because of poor business.

What the provincial and city governments are banking on instead is the opening of access roads, which, they said, could jack up real estate value.

Remulla said that if the national government planned to expand the Sangley operation to include scheduled domestic and connecting flights in the future, it must build a road solely devoted to airport traffic.

“Nobody earns from an airport,” Remulla said. “What earns the money is the real estate. We’re talking about P300,000 per square meter here.”

He cited several proposals for reclamation and construction of a road network that had been submitted to the national government.

Last week, Metro Pacific Tollways Corp. announced its plan to revive a feasibility study on extending the Manila-Cavite Expressway by 8-9 km to Sangley.

Remulla said that aside from higher income through taxes, more jobs, and economic activity, opening an airport would give Cavite “a better goodwill,” as a province “at par with Metro Manila.”

According to him, talks about building an airport were held as early as 1992 with his father, the late Juanito Sr., who was then Cavite governor. Among the first to submit a proposal was urban planner Gordon Wu of Hong Kong-based Hopewell Holdings Ltd.

In the 1990s, the US Agency for International Development and later the Japan International Cooperation Agency came out with their own studies.

“They were already saying that (Sangley) was the best place to put up an airport and that (Naia) was not, with only one terminal at the time,” Remulla said.

After Naia Terminal 2 was built, there were at least three more proposals for the Sangley airport before President Joseph Estrada was deposed in 2001.

In 2007, then President Arroyo issued an executive order converting Sangley into an “international logistics hub with modern seaport and airport.”

The Sangley Airport Infrastructure Group, a consortium of Solar Group’s Wilson Tieng and SM Group, came up with an unsolicited $12-billion proposal that included a 2,500-ha reclamation.

The Cavite government also pitched its own $10-billion “airport complex” plan through a public-private partnership.

These proposals, however, failed to take off.

Remulla said the Sangley airport project was still something to look forward to.

“What’s in it for us? It brings to life the fact that Cavite is the first melting pot of business and that we’re just going back to it,” he said.