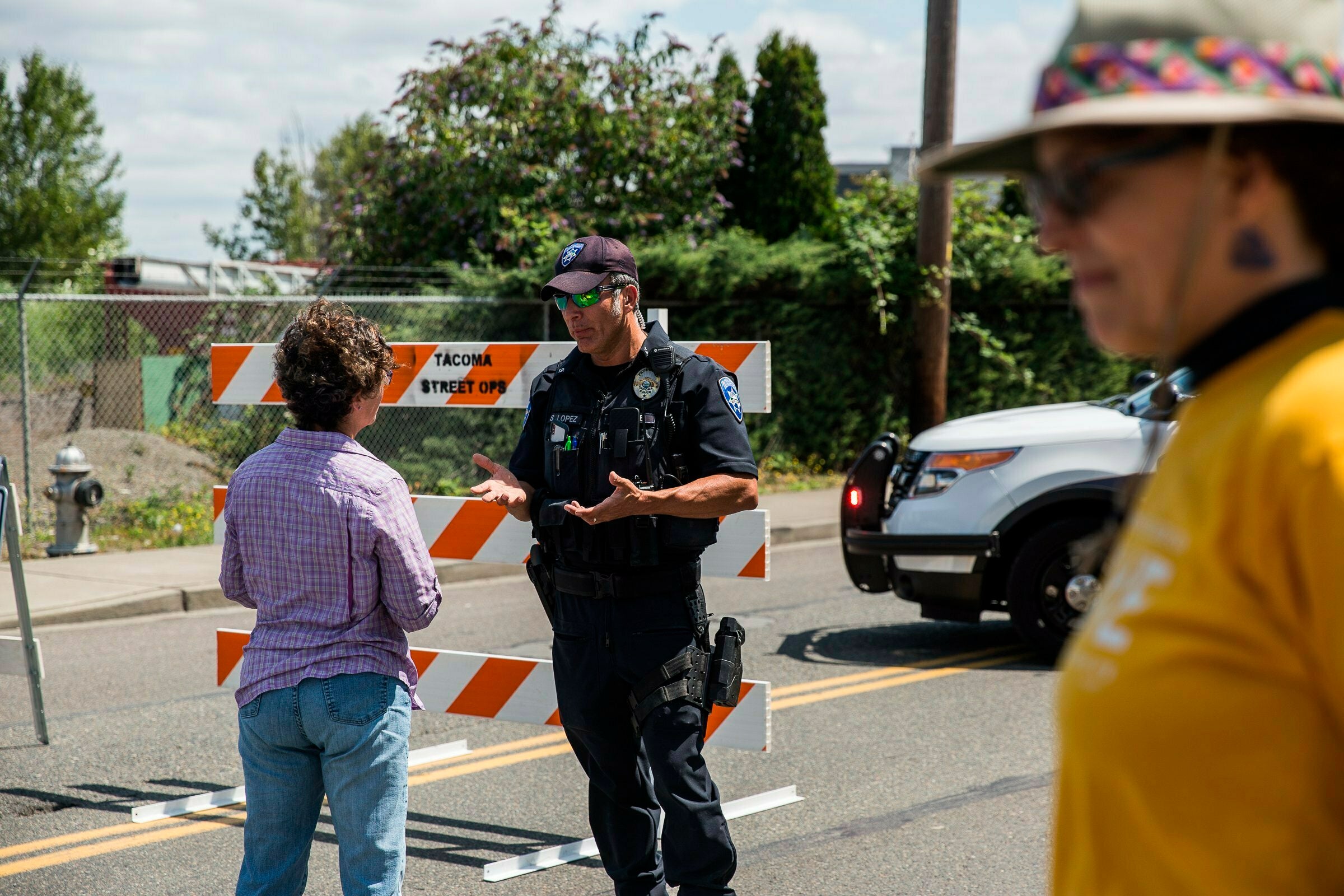 The shooting took place about six hours after a peaceful rally in front of the detention center, police spokesman Loretta Cool said.

Police said Van Spronsen caused a vehicle to catch fire and that he attempted to ignite a large propane tank and set buildings on fire. Police said that besides the rifle, he had a satchel and flares.

Police said officers called out to Van Spronsen, and shots were fired.

Cool said all four officers fired their weapons, but she didn’t have specific details of what took place. She said the officers weren’t wearing body cameras, but the area is covered by surveillance cameras from the detention center. She said she didn’t know if the man fired at the officers.

After the gunfire, officers took cover, contained the area and set up medical aid a short distance away, police said.

Officers then located Van Spronsen and determined he had been shot and was dead at the scene.

Authorities say investigators are processing the scene and police are continuing to investigate. No law enforcement officers were injured. The four Tacoma police officers who fired their weapons have been placed on paid administrative leave as is standard in officer-involved shootings.

Van Spronsen was accused of assaulting a police officer during a protest outside the detention center in 2018, The News-Tribune reported. According to court documents, he lunged at the officer and wrapped his arms around the officer’s neck and shoulders, as the officer was trying to detain a 17-year-old protester June 26, 2018, the newspaper reported.

According to court documents, police handcuffed Van Spronsen and found that he had a collapsible baton and a folding knife in his pocket. Van Spronsen pleaded guilty to the charge of obstructing police, and was given a deferred sentence in October, the News-Tribune reported.

GEO Group, which runs the 1,575-bed Northwest Detention Center, in an email to The Associated Press said baseless accusations about how detainees are treated at its facilities “have led to misplaced aggression and a dangerous environment for our employees, whose safety is our top priority. Violence of any kind against our employees and property will not be tolerated. We are thankful for the quick and brave action by the Tacoma Police Department, which prevented innocent lives from being endangered.”

GEO Group said the detention center in Tacoma has modern amenities with air conditioning, recreational activities, a bed for every individual and medical care available at all hours.

Last year, a federal judge ruled that Washington state could pursue its lawsuit seeking to force GEO Group to pay minimum wage for work done by detainees at the detention center.

In November, a Russian asylum-seeker who conducted a hunger strike to protest the conditions at the detention center died by suicide, the Pierce County Medical Examiner’s Office ruled.

Mergensana Amar, 40, was taken off life support after attempting to kill himself while in voluntary protective custody at the detention center on Nov. 15, U.S. Immigration and Customs Enforcement said.