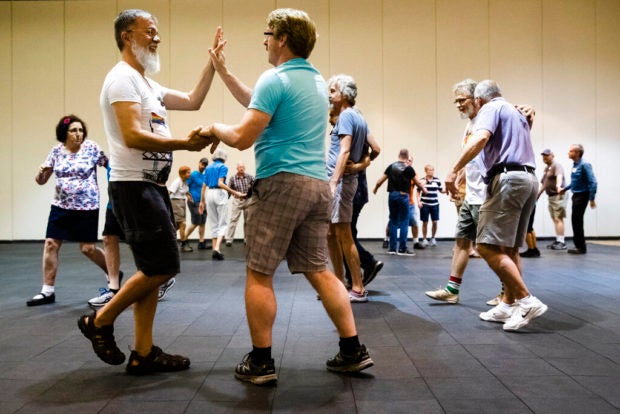 PHILADELPHIA — There wasn’t a crinoline in sight as 850 square dancers at the International Association of Gay Square Dance Clubs opened its annual convention last week in a Philadelphia hotel, bringing their best promenades and do-si-dos to a slightly sped-up version of “Somewhere Over the Rainbow.”

Correction: There was one crinoline flouncing across the floor, a multi-tiered blue skirt with silver accents and a maroon corset, worn by Ward Lambert of Phoenix. “Certain things never go out of style,” said Lambert, 56, dark chest hair peeking over the fabric of his fitted bodice. “You just have to reinvent them.”

You could say the same about square dancing, a centuries-old dance style often associated with the American West and middle school gymnasiums. While there are still square dance clubs nationwide, numbers are dwindling.

IAGSDC is trying to counter that decline, and dispel misperceptions non-dancers might have.

“They think it’s a bunch of 70- and 80-year-olds wearing dresses made in the 1950s dancing to music recorded in the 1940s,” said Tim Harper, president of the Independence Squares, a Philadelphia club that serves the LGBTQ and straight communities.

While there are octogenarian dancers, all of that allemand’ing left and right “keeps you young,” said Harper, noting that his club’s oldest member is 85 and two newest members are 24 and 25.

The Independence Squares were founded 30 years ago in part as a social outlet for the LGBTQ community. This was decades before same-sex marriage was legalized, just before “Don’t Ask, Don’t Tell” was pitched as a reasonable way for LGBTQ members of the military to serve without issue.

“You danced with your girlfriend or your wife. There were boys, there were girls. That was it,” Richman said. “If your husband or wife died, sorry, you couldn’t dance anymore.”

LGBTQ clubs happily welcomed singletons and had no problem with men dancing as women and vice versa. These clubs also put comfort over tradition when it came to dress. 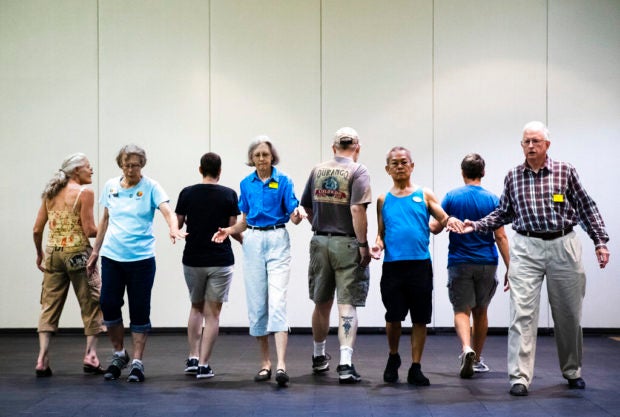 This July 3, 2019 photo shows people participating during the annual International Association of Gay Square Dance Clubs convention in Philadelphia. The annual convention brought in 850 dancers bringing their best promenades and do-si-dos to a slightly sped-up version of “Somewhere Over the Rainbow.” Image: AP Photo/Matt Rourke

That’s one aspect of the Independence Squares that appealed to New Jersey shore resident Eileen DuBois, 70.

“We dress casually here, T-shirts and shorts,” said DuBois, who met her late husband square dancing and also belongs to a straight square dancing club. “The other clubs like traditional square dance clothing with crinolines and pettipants and all that mess.”

Another welcome aspect: interacting with people she might not have ordinarily met.

Many consider the annual convention akin to a family reunion. Between events last weekend, Tina and Jason Blake of St. George, Utah, were looking to reconnect with friends they’d made at IAGSDC’s 2014 convention in Salt Lake City.

“We just enjoy dancing with the gay community so much,” said Tina Blake, 60, who with her husband also belongs to a more traditional square dance club. “They are very welcoming to straight couples.”

She also finds the LGBTQ clubs dance at a faster pace.

“It’s a very aerobic activity. They dance the way we did when we danced in our 20s,” Blake said. “It’s fast, it’s exciting. It’s fun.”

Clubs from the U.S., Canada and Japan mingled around Blake as she spoke. Here, the Denver-based Rocky Mountain Rainbeaus. There, the Edo8s, from Japan. The Tech Squares of Cambridge strolled through with their sister club, the Boston Uncommons. Among the clubs from California: the Redwood Squares, the Golden State squares and the Tinseltown Squares.

Coming up were the specialty “tips,” or dances, including one for fans of leather; another for hairy men; and the “moonshine,” for those who want to get naked and dance (behind closed doors).

“We haven’t attended those,” Blake said.

Novices quickly find that square dancing is more complex than they’d believed when they were preteens awkwardly touching another student’s arm in the gym. There are multiple achievement levels from “mainstream,” which has 68 different “calls” or moves, to “challenge,” which some compared to complex math.

Dancers don’t know their steps in advance. A caller announces the moves over the music — which can be anything from Hank Williams to Rihanna — while the dancers are in motion.

There were hugs all around when the Blakes found their friends from Salt Lake City’s LGBTQ-friendly club, the Temple Squares, mother and daughter dancers Mindi Griffin, 55, and Lizz Ashby, 35, and married dancers Ross and Justin Crawshaw-Lopton.

Tina Blake said Ross Crawshaw-Lopton provided her in 2014 with “the pre-gay convention tutorial of what to expect as a straight person so my eyeballs didn’t come out of my head.” That included knowing the call-backs, extra moves many of the LGBTQ clubs have adopted.

When someone calls “pair off,” for example, dancers look pointedly at their partner’s chests and say, “Nice pair.”

“The first time I did that at a straight club I almost got slapped,” said Crawshaw-Lopton, 60. NVG