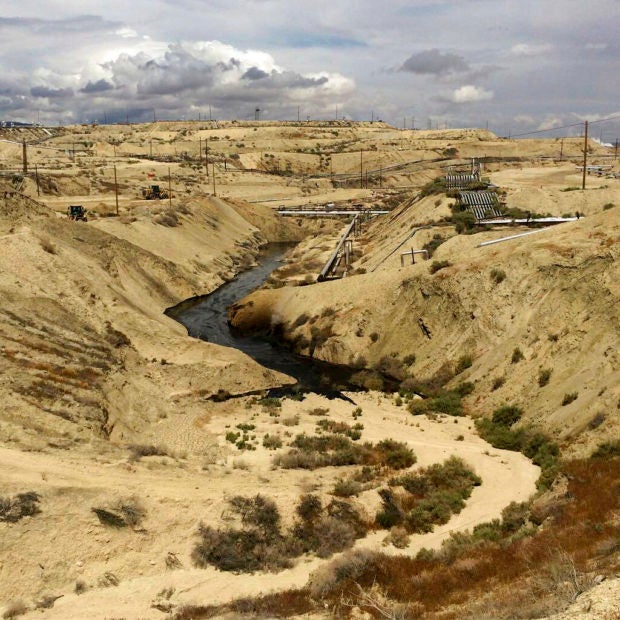 SACRAMENTO, California — Officials began to clean up a massive oil spill Friday that dumped nearly 800,000 gallons of oil and water into a California canyon, making it larger — if less devastating — than the state’s last two major oil spills.

The newly revealed spill has been flowing off and on since May and has again stopped, Chevron spokeswoman Veronica Flores-Paniagua said. She and California officials said the spill is not near any waterway and has not significantly affected wildlife. The last flow was Tuesday.

Chevron reported that 794,000 gallons (about 3 million liters) of oil and water have leaked out of the ground where it uses steam injection to extract oil in the large Cymric Oil Field about 35 miles (56 kilometers) west of Bakersfield. The steam softens the thick crude so it can flow more readily and is a different process from fracking, which breaks up underground layers of rock.

The state has issued Chevron a notice of violation ordering it to stop steam injections around the spill. The company also increased its production of oil from wells in the area. Both actions are intended to relieve underground pressure that may be forcing the mix of oil and water to the surface.

Chevron will pay for the cleanup, though the state will oversee the process, said Steve Gonzalez, a spokesman for the California Department of Fish and Wildlife’s Office of Spill Prevention and Response.

The cleanup and the investigation into what caused the oil flow were somewhat delayed as officials ensured there are no dangerous fumes or sinkholes that could trap workers or heavy equipment, he said.

“At this point, they have it dammed off and they’re sucking it out, sucking the oil out,” Gonzalez said.

Environmental groups said the Chevron spill is another sign of weakened regulations under an embattled California agency. Gov. Gavin Newsom this week fired the head of the state’s oil and gas division over a recent increase in hydraulic fracturing permits and amid a conflict-of-interest investigation of other division employees.

The group said state regulators and the U.S. Environmental Protection Agency last year approved an exemption that removed protections from an aquifer in the Cymric Oil Field at the request of Chevron and other oil companies.

“California’s industry-friendly oil regulator continues to provide about as much protection as a screen door on a submarine,” Hollin Kretzmann, a senior attorney at the Center for Biological Diversity and member of the Last Chance Alliance, said in a statement.

Neither Chevron nor division spokesman Don Drysdale commented on the criticism.

The spill, which was first reported by KQED News, comes after a judge earlier this year fined Plains All American Pipeline nearly $3.35 million for causing what had been the worst California coastal spill in 25 years.

The state’s worst spill was the 1969 Santa Barbara oil spill that leaked at least 80,000 barrels of crude oil into the Santa Barbara Channel. Each barrel is 42 gallons (159 liters).

But the effect of this year’s Chevron spill on birds and wildlife appears minimal, Gonzalez said. Chevron said the spill flowed into a dry stream bed, and Gonzalez noted that it is unlikely to rain anytime soon.

“There’s no active waterway that it’s nearby, so that’s the good news,” he said. /jpv

Read Next
Part of Subic road closed for expressway expansion
EDITORS' PICK
Sex on the menu for Pogo workers
SM continues to send relief assistance to remote towns in Batangas
Foreigners prepare to flee as China virus toll tops 100
Best Gift Ideas in the Philippines
First female commodore named
We Can’t Guarantee You’ll Win a P20 Billion Jackpot, But We Can Help You Try
MOST READ
Sex on the menu for Pogo workers
Kobe Bryant’s body identified among helicopter crash victims
Virus outbreak death toll in mainland China rises to 132, cases increase to 6K
Kobe Bryant gear pulled out of Nike online store in wake of his death
Don't miss out on the latest news and information.