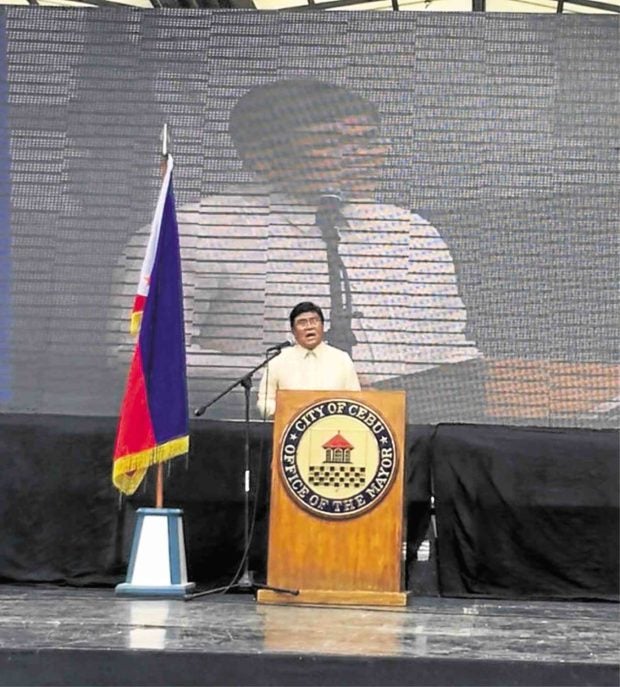 MISSING Cebu City Mayor Edgardo Labella speaks during his inauguration on June 30. On the podium is the seal of the Office of the Mayor that has reportedly disappeared. —NESTLE SEMILLA

CEBU CITY—The camps of Cebu City Mayor Edgardo Labella and former Mayor Tomas Osmeña have accused each other of taking the official seal of the city government.

Labella’s camp maintained that the city seal was taken by Osmeña when the latter stripped bare the mayor’s office on the 8th floor of the Cebu City Hall.

But the legal counsel of Osmeña disputed the claim that the former mayor had taken the seal.

Lawyer Amando Virgil Ligutan maintained that based on the logbook of the security guard, engineer Mejilito Cajes of the building and maintenance general services office took the seal and used it during the oathtaking of Labella on June 30.

Cajes was the complainant in the criminal and administrative cases filed in the Office of the Ombudsman against Osmeña and 42 others, including city officials, employees, security guards and construction workers, for removing the fixtures inside the mayor’s office.

Osmeña insisted that he owned the fixtures since he used his personal funds when he renovated his office in 2016.

But the camp of Labella said the former mayor didn’t just take the fixtures but also the seal of the city.

Cebu City legal officer Rey Gealon said what Labella used during the oathtaking was different from the missing seal, which, he noted, was “new and considered the official seal of the city.”

But Ligutan claimed that there could only be one seal of the city.

“The city legal officer himself said that a new version needs approval by the city council … unless he changes his position and argue that a city council approval is not needed,” Ligutan said.

He said the seal that was used during Labella’s oathtaking was the official seal.

He reiterated Cajes, the complainant in the Ombudsman cases, removed the seal from the mayor’s office because it would be used by Labella during his oathtaking.

Cajes said the seal they used during the oathtaking is different from the official seal that is allegedly in the possession of Osmeña.

His position was supported by Gealon. “All has been said. I believe it is now best to defer any comment on the matter and give utmost respect and courtesy to the Ombudsman… to conduct its investigation of those cases already filed,” he said.