Duterte wants ‘Department of OFWs’ set up by December 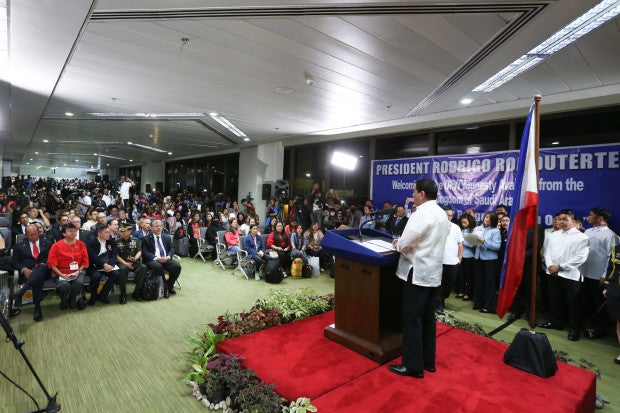 President Rodrigo Roa Duterte announces that he will implement more programs that will benefit Overseas Filipino Workers (OFWs) as he acknowledges their sacrifices for their families and their contribution to the development of the country in his speech during his arrival at the Ninoy Aquino International Airport Terminal 1 on April 17, 2017 following his successful visits to the Kingdom of Saudi Arabia, Bahrain and Qatar. KING RODRIGUEZ/ Presidential Photo

MANILA, Philippines — President Rodrigo Duterte on Friday said he wants a Department of Overseas Filipino Workers by December this year.

“Apurahin ko ‘yang Department of OFW,” Duterte said in a speech at the Araw ng Pasasalamat for OFWs at Camp Aguinaldo in Quezon City.

“By December. Buong Pilipinas ito. Bawal na ‘yang recruitment diyan sa labas na punta ka doon. Doon ka makipag-deal, may listahan doon. Mamili ka na lang kung sino ang gusto mo at ‘yan regulated and I have the power to do that because that kind of mechanism of recruiting Filipino workers abroad has been abused and abused and abused,” he added.

The President said he wanted to recruitment agencies in the country under the proposed Department for OFWs.

He assured the OFWs that there would be no “horrendous charges.”

He warned those illegal recruiters that their days are numbered.

He said he wanted all recruitment agencies in the country to be under government control.

“Government supervision and control because what has happened and has been happening is not acceptable to the Filipinos now,” he said.

The President said that by August he would be creating an OFW office.

“Let me sleep on it for about… August. Second week of August meron na akong… Maybe I can create the Office of OFW. Pati yung isa meron pa ako, yung sa marino. A marine bureau,” he said./kga