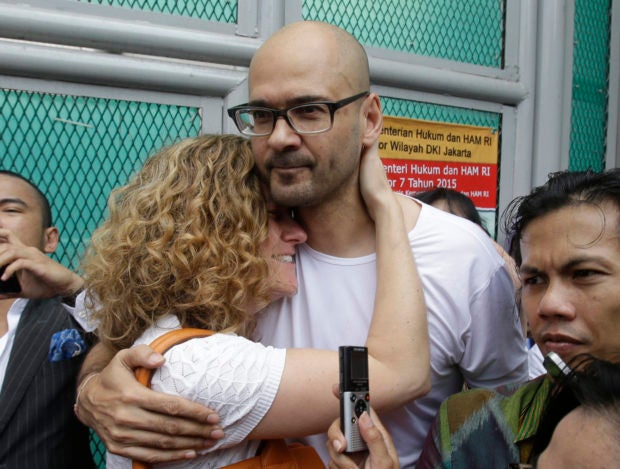 In this August 14, 2015, file photo, Canadian teacher Neil Bantleman, center right, hugs his wife Tracy, left, after he was released from Cipinang prison in Jakarta, Indonesia. Indonesia has freed the Canadian teacher who maintains he was wrongfully convicted in 2015 of sexually abusing children at an international school in Jakarta. (AP Photo/Achmad Ibrahim. File)

JAKARTA — Indonesia has freed a Canadian teacher who maintains he was wrongfully convicted in 2015 of sexually abusing children at a prestigious international school in Jakarta.

Neil Bantleman, teaching assistant Ferdinant Tjiong, and five other employees at the school were convicted following allegations of abuse of kindergarten-aged children that lawyers and teaching staff at the school said were motivated by money.

The case, which became notorious for its bizarre and flimsy evidence, highlighted chronic problems in Indonesia’s justice system. Another suspect killed himself in custody in 2015 by drinking a bathroom cleaner, according to police.

A Justice Ministry official who did not want to be named because of the case’s sensitivity in Indonesia, and one of Bantleman’s lawyers, Patra M. Zen, said Friday that Bantleman had applied for clemency, which was granted by President Joko Widodo last month. The official said Bantleman was released on June 21.

Tjiong, sentenced to 10 years prison, has not applied for clemency and remains in prison.

A statement that Canadian broadcaster CBC attributed to Bantleman said, “Five years ago, I was wrongfully accused and convicted of crimes I did not commit and furthermore never occurred. I applied for clemency, which I am pleased was granted by Indonesia last month, upholding essential justice and human rights.”

Jakarta International School, which was subsequently renamed, was attended by children of foreign diplomats, expatriates, and Indonesia’s elite. It had about 2,400 students aged 3 to 18 from about 60 countries.

The mother of one of the three allegedly abused children sued the school in 2015 for alleged negligence and was seeking $125 million in compensation.

The same district court that convicted Bantleman and Tjiong rejected the woman’s lawsuit on the basis it was not proven the alleged abuse had taken place. The original convictions were overturned by the High Court but then reinstated in 2016 by the Supreme Court, which lengthened Bantleman’s 10-year sentence.

“There were many irregularities in this case,” said Zen, the lawyer. “But I don’t want to look back. I hope my client gets a new life.” /kga