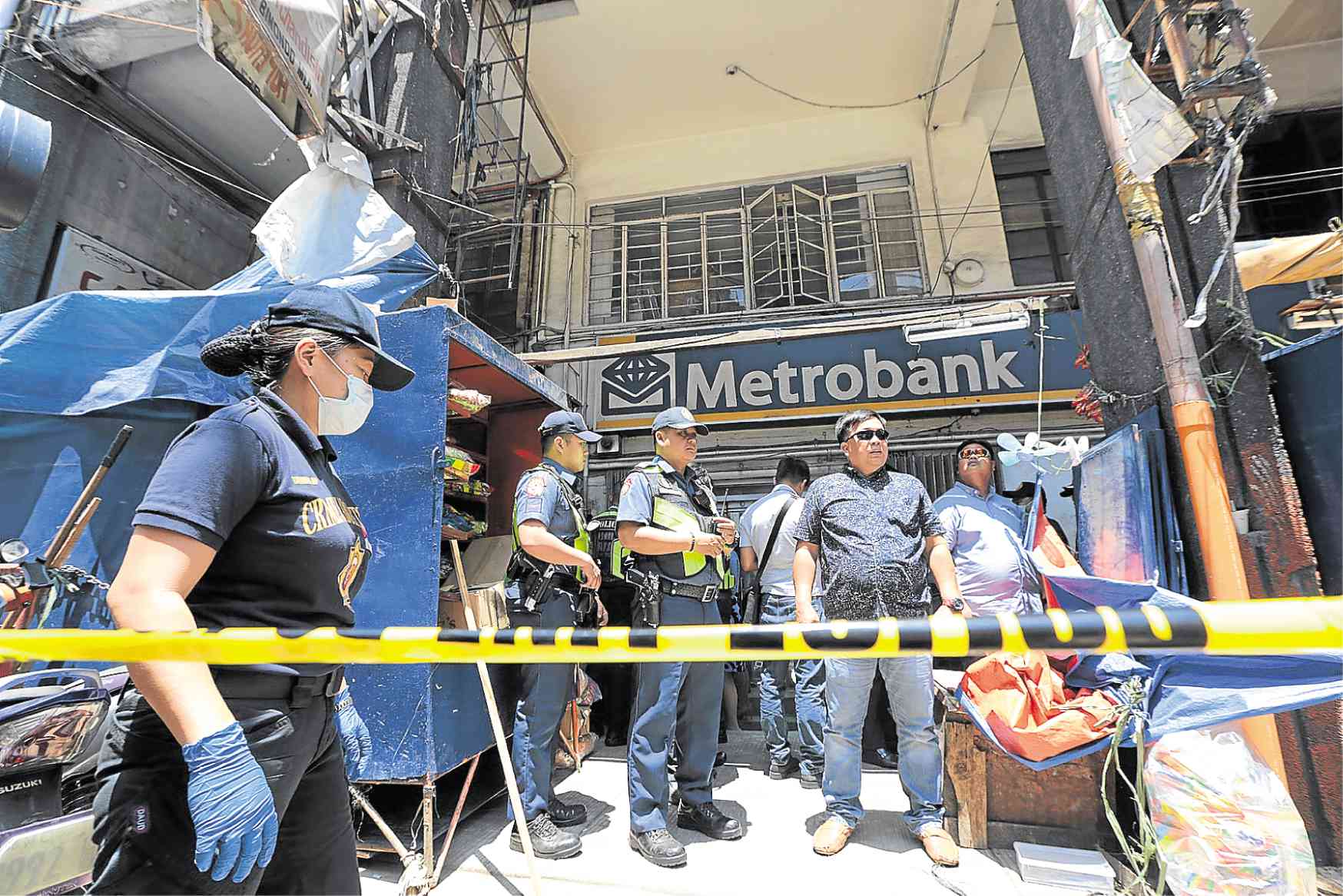 MORNING HEIST Police cordon off the Metrobank branch at Santo Cristo Street and Recto Avenue in Binondo, Manila, after seven men robbed the bank before the start of business hours on Thursday morning. The robbers casually walked into the bank and the employees refused to allow police in for two hours after the robbery, said Brig. Gen. Vicente Danao, chief of the Manila Police District. —GRIG C. MONTEGRANDE

But the robbers entered the bank at 8:43 a.m. on Thursday.

It wasn’t a forced entry. One of the seven men knocked on the door of the bank at Santo Cristo Street and Claro M. Recto Avenue, and a security guard let the group in.

“There was no resistance,” said Police Brig. Gen. Vicente Danao, chief of the Manila Police District. “I would understand if the robber was pointing a gun at the guard, but there was none.”

But even more puzzling, he said, was the bank employees’ refusal to let police in after they had reported the robbery.

“They allowed the robbers to come in but refused entry to the cops,” he said.

It took an appeal from Mayor Francisco “Isko Moreno” Domagoso to the chief of the bank’s security for the cops to be allowed in. By then, it had been two hours after the robbers walked out of the bank.

It was unclear how much the robbers had taken, but Metrobank issued a statement, saying none of its clients had lost money in the heist.

Metrobank condemned the robbery and said it would work with the police for the arrest of the robbers.

Little to go by

Danao said investigators had little to go by—footage from a barangay security camera installed right outside the bank’s door.

A review of the material showed the seven men—some wearing helmets, others caps—walk up to the bank.

One of those wearing helmets knocked on the door at 8:43 a.m. A security guard opened the door and five of the men went in.

The other two served as lookouts, Danao said.

Those who went in did not threaten the security guard with guns, he said.

Police Lt. Col. Noel Aliño, Meisic Police Station commander, said there were at least three security guards inside the bank at the time. Two were armed with shotguns and the other had a .38-cal. revolver, he said.

Vendors whose stalls were right across from the bank told investigators that they noticed nothing unusual happening at the time of the robbery, Danao said.

Investigators would have learned something had they been allowed into the bank at once.

“The most critical hour is the first hour,” Danao said. “That’s the time when you ask the employees how the robbers looked, what they did, what they took, if anybody was hurt.”

“Most important, you try to preserve the fingerprints. But two hours had passed. They didn’t let us in, from 9 a.m. to 11 a.m. The mayor had to come here and talk to the owner before the bank allowed the investigators to come in,” he said.

Mayor Domagoso called a news conference and said he was offering a P1-million reward for information that would lead to the capture of the robbers.

Domagoso called on other criminals to leave Manila.

“We will pursue you. We will look for you. We will not give you peace and we will not allow you to disrupt the city’s peace and order,” Domagoso said. —REPORTS FROM AIE BALAGTAS SEE, GABRIEL PABICO LALU AND FAYE ORELLANA