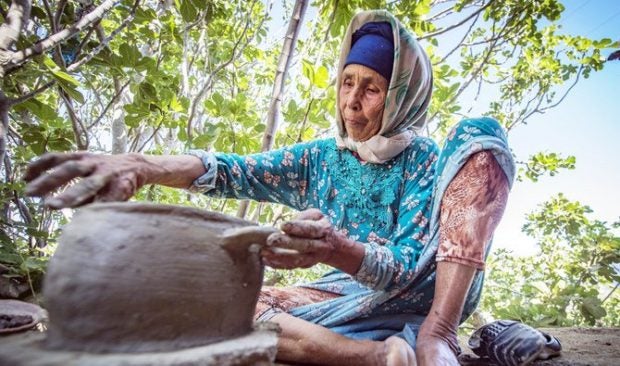 Moroccan potter Fatima Harama from the M’tioua tribe works on pottery near the village of Ourtzagh in the region of Taounate. Image: AFP

Beautiful handcrafted pottery made by Mama Aicha rarely sells in Morocco anymore, but thanks to social media, her ancient techniques are drawing students from around the world to the foothills of the Rif mountains.

“When I heard about the workshop on Instagram, I signed up immediately because the practice is disappearing,” said Mirna Banieh, a young artist who traveled to Morocco from the West Bank town of Ramallah. “Mama Aicha is old and her knowledge must be passed down.”

They came from London and Nairobi to a remote hamlet at the end of a rocky trail for a week-long initiation.

Their goal is to learn how to shape clay pieces by hand, dry them in the sun, fire them in a large open pit filled with wood and polish them with stone before decorating them with natural pigments.

Like everywhere in the Rif mountains, women potters from the Sless tribe, to which Aicha Tabiz’s family belongs, are vanishing.

The tribe counted around 90 potters at the end of the 1990s. Now, only a half-dozen remain.

“The youth here do not want to dirty their hands with clay. They dream of being officials with fixed salaries,” said a woman whom everyone affectionately calls Mama Aicha.

The ancestral knowledge that, according to some experts dates back to the Bronze Age, is being lost little by little due to a decline in the market.

“When I was young, everyone used clay pots and bowls for daily life and my mother sold them at the market, but today everyone prefers plastic,” said Mohamed Tabiz, 53, Aicha’s eldest son.

Researchers, collectors, enthusiasts are among the many that have warned for decades of the disappearance of this craft once passed down from generation to generation.

“We wanted to establish a museum in the village,” Tabiz said, but “the local authorities were not interested.”

The most scholarly of those calling attention to the tradition’s decline, German anthropologist Rudiger Vossen, crisscrossed Morocco in the 1980s and 1990s to catalog the techniques and designs used by each tribe. 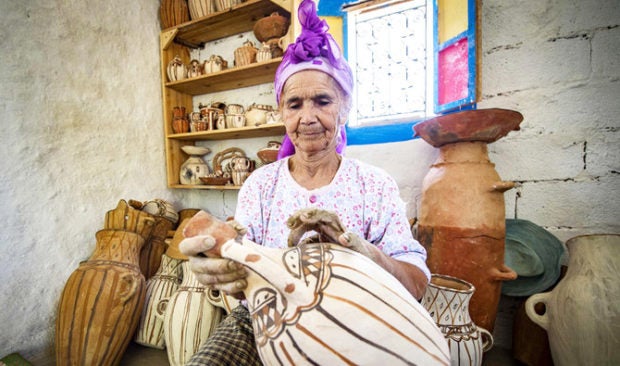 Moroccan potter Aicha Tabiz, also known as Mama Aicha, holds one of her works near the village of Ourtzagh in the foothills of the Rif mountains. Image: AFP

Volunteers from the “Terre des Femmes” (Women’s Earth) association have traveled to the Rif for years, collecting pottery from isolated farms and selling it to tourists from a small boutique in the capital Rabat.

But the most famous is undoubtedly the artistic director of Dior, Italian Maria Grazia Chiuri, who recently put the Rif potters in the spotlight at a haute couture fashion show in Marrakesh.

But it is thanks to Instagram that Mama Aicha’s work has gained a global reputation.

“It is used a lot by potters, everyone posts photographs of their pieces (and) exchanges tips and advice,” said Kim West, a 33-year-old British workshop participant.

Through this global word-of-mouth promotion, the workshops advertised on the website of a new association, Sumano, have seen staggering success.

“All the spots were filled two days after registration opened, we had a waiting list with applicants from across the globe,” said Martha Valdeon, 42, a co-founder of Sumano from Spain.

With a twinkle in her eye, Mama Aicha patiently guides her students in the studio set up next to the family farm.

Papers tacked to the wall list useful words in the local dialect, terms for pottery and tools, common phrases such as “can you help me?” and “what do you think of this?”

The master potter teaches mainly using gestures. Like the majority of women from remote parts of Morocco, she dedicated her life to her fields, her livestock and her children.

At 27, Houda Oumal, from the neighboring tribe M’tioua, is one of the few to want to “follow in the footsteps of her mother.”

She lives with her parents at the top of a mountain amid the cannabis fields that make up, entirely illegally, the principal source of income of the Rif. She began to mold clay at the age of seven, but she does not read or write. There are five mosques in the community, but not a single school.

“This craft allows us to make a good living, we need to make our expertise known so that it becomes profitable,” she said with a timid smile.

Recently, the young woman began to sign her creations with her initials, adding more graphic designs and new shapes to “diversify her work and stand out.”

“For us, these pieces are works of art, they have real value,” Valdeon said.

The Sumano association places orders with the potters buy the works, transports them to Spain and sells them at 20 times the local price on its website, promising to redistribute the income locally “when the business becomes profitable.” HM/JB