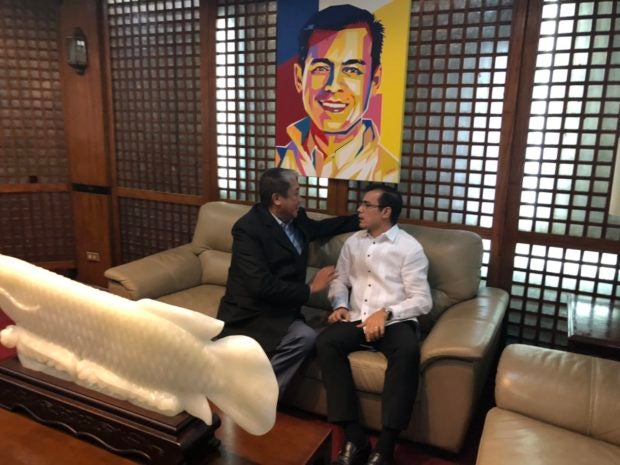 MANILA, Philippines—Mayor Isko Moreno on Thursday was assured of support for his style of governance by President Rodrigo Duterte through an emissary who had become Moreno’s former boss and who might share the same management style with the new Manila mayor—Transportation Secretary Arthur Tugade.

Moreno was visibly touched by the visit of Tugade to the mayor’s office, saying it was Tugade who first responded to his call for help from the Duterte Cabinet.

“This is just a way of appreciating because I’ve been asking for help and the first secretary who went here, Cabinet, you know he is representing the President technically speaking,” the mayor said at a press conference after a one-on-one meeting with Tugade.

“So his visit here, it’s something I am happy about. It’s touching,” Moreno added.

In July 2017, Moreno was appointed the chair and chief executive officer of the North Luzon Railways Corp., an agency under the Department of Transportation (DOTr). Moreno resigned from that post in October 2017 for personal reasons.

Moreno said he’s at a loss for words in expressing appreciation to Tugade.

“You all know that in the Philippines, Manila is just one of the 1,600 municipalities and cities,” said the mayor.

“So that level of importance, time and effort and bringing other members of the agency, the heads of their respective departments..there are no words to say, no other word comes to my mind that can replace the words ‘thank you,’” Moreno said.

He described his reunion with Tugade as “heartwarming.”

“Why wouldn’t I be glad? Here you are being visited by your former boss,” Moreno said.

“I used to report to him, and now you’re being visited by your boss,” he said.

In some photos released by the Manila Public Information Office, Moreno and Tugade are seen in an emotional reunion.

Moreno was hugging Tugade while the transportation chief appeared to be whispering something to the mayor.

When asked by reporters what he told Moreno, Tugade said: “I whispered to him and told him, boss, never let go. We’re here, the Duterte administration is here, the Department of Transportation is here. Never let go.” /tsb