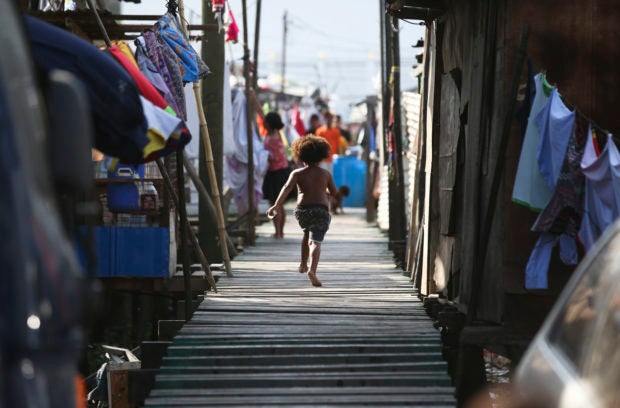 In this November 15, 2018, file photo, a girl runs towards their home at Port Moresby, Papua New Guinea. More than 20 people including pregnant women and children have been killed in recent tribal violence in Papua New Guinea, media reported on Wednesday, July 10, 2019. The death toll and dates of the violence in the remote highland province of Hela varied in reports by Australian Broadcasting Corp. and the Post-Courier newspaper. (AP Photo/Aaron Favila, File)

CANBERRA, Australia — Police, and soldiers have been sent to Papua New Guinea’s highlands to make arrests and provide security after more than 20 people, mostly women and children, were slain in recent tribal violence over a feud that has lasted for years, officials said Wednesday.

In the latest attack, 16 women and children were killed this week by assailants armed with rifles in the village of Karida in Hela province, said Papua New Guinea Acting Police Commissioner Francis Tokura.

Because two of the victims were pregnant, police put the death toll at 18. Officials differ on whether the attack happened on Sunday or Monday.

Authorities said the slaughter was probably retaliation for an ambush near Peta village on Saturday that left six or seven people dead.

Tokura said 20 police officers and 10 soldiers were sent to Hela to “stop any further violence and capture the killers.”

“This is a tragedy. It is an unbelievable, unthinkable and atrocious criminal act that must be dealt with swiftly and severely,” Tokura said in a statement.

“We will use all available resources to bring the killers to justice,” he added.

Prime Minister James Marape said many of the victims lived in his electorate. “Today is one of the saddest days of my life,” he said on social media.

Marape blamed a police shortage in Hela for the lawlessness.

“How can a province of 400,000 people function with policing law and order with under 60 policemen …?” he wrote.

“To all who have guns and kill and hide behind the mask of community, learn from what I will do to criminals who killed innocent people, I am not afraid to use strongest measures in law on you,” he said, referring to the death penalty.

Hela official Rex Humbi said the latest violence was part of a tribal war that had been waged for more than 15 years.

“The people that got killed were innocent women and children,” he said. “The police do go and investigate. They have the authority, of course, but don’t have the firepower” to bring the killers to justice.

The killers were possessed by Satan and “feed on the soul, or the spirits, of the innocents that have been lost,” Humbi said. /kga

Read Next
Deadly Sulu Army camp blasts: Who is Norman Lasuca?
EDITORS' PICK
SMDC’s Bloom Residences: A master planned community that cares for your health and wellness
COVID-19 cases in PH pass 3.2 million mark with 37,154 new cases — DOH
Over 3 Million worth of prizes to be won at Smart Padala’s SENDali Manalo Promo!
Upsilon, Unilever give ‘real talk’ on climate change crisis
What to expect as Metro Manila starts ‘no vaccination, no ride’ policy on Monday
Metro Manila’s daily COVID-19 growth rate drops to 2% — Octa Research
MOST READ
Thailand records first Omicron death
‘Not my loss’: Did Kris Aquino just comment on her breakup with Mel Sarmiento?
Prince Harry sues for UK police protection
Ivana Alawi tests positive for COVID-19, urges public to comply with health protocols: ‘No one’s above the law’
Don't miss out on the latest news and information.