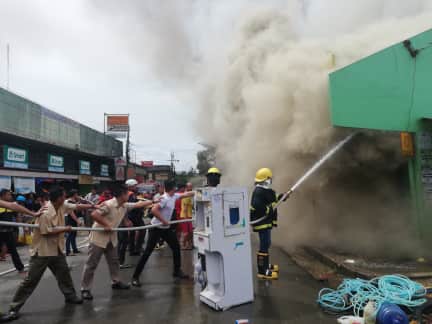 Firefighters try to put out the flames at the Cogon Public Market in Tagbilaran City on Wednesday afternoon. (INQUIRER PHOTO/LEO UDTOHAN)

No one was injured.

Flora Espejo, 71, was weeping as she looked as the fire devoured part of the market.

Espejo, a vegetable vendor who spent most of her life in the market, wanted to save her vegetables, but to no avail.

Senior Fire Inspector Marlyn Macatangay, acting fire marshal of the Bureau of Fire Protection-Tagbilaran, said they received the alarm at past 1 p.m. on Wednesday.

It took about an hour for firefighters to put out the flames.

Cogon Public Market is considered a landmark in the city and a popular place for its tabo (market day) every Tuesday and Friday.

Jose Sabello, 56, another vegetable vendor, quickly saved her four children, who were at the store when the fire broke out.

“I made sure to save my children. I just left our goods behind,” he said.

Macatangay said fire trucks from the nearby towns of Dauis, Maribojoc, and Baclayon responded to the fire alarm. (Editor: Leti Boniol)