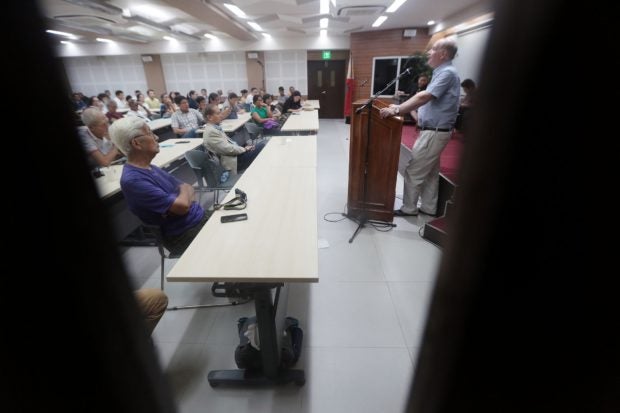 CLASS ACTION Robert Swift (right), the American lawyer who led the successful class action lawsuit against dictator Ferdinand Marcos in Hawaii, speaks to a gathering of martial law victims on Tuesday at the University of the Philippines Diliman. He explained that in an unfortunate turn of events, the Hawaii court ruled to compensate only about 6,000 of the close to 10,000 who had originally filed the suit. —GRIG C. MONTEGRANDE

MANILA, Philippines — Martial law victims and their relatives who have been removed from the official list of people to be awarded compensation after winning a class action lawsuit for human rights violations against the estate of dictator Ferdinand Marcos in Hawaii confronted American lawyer Robert Swift on Tuesday about their delisting.

Swift, who spoke at the UP (University of the Philippines) Law Center about the historic Hawaii class action that resulted in a nearly $2-billion award for some 6,000 martial law victims, said he had no control over the Hawaii court’s decision to reduce the number of award claimants.

To claim compensation, victims or their relatives were required to submit claim forms twice, first in 1993, and again in 1999, after the Marcos family raised the matter of some “fake” claimants.

“We were one of the first to join the Hawaii lawsuit in 1986, but why were we delisted? There are a lot of us from Region 3 (Central Luzon), our husbands are listed as missing to this day,” a tearful Helena Jimenez said in Filipino during the open forum following Swift’s talk.

Jimenez and a handful of other martial law victims and their families borrowed money to travel as early as 3 a.m. to the forum to confront Swift.

Earlier this year, a US court directed the third compensation distribution, which amounted to $13.75 million to thousands of martial law victims who had won the Hawaii lawsuit, after finding Marcos liable for enforced disappearances, torture and extrajudicial killings.

The money was allocated for the victims in a settlement agreement reached in January as their share of $32 million obtained from the sale of four paintings, including a Monet, acquired by the dictator’s widow, Imelda, and part of their family’s ill-gotten wealth.

Also under the deal, the government was to receive $4 million and the remainder to be split between Golden Buddha Corp. and the estate of Roger Roxas, who reportedly discovered the so-called Yamashita treasure.

Of the initial class members of close to 10,000, however, only around 6,000 were allowed by the Hawaii court to receive compensation after they had completed the requirements for registration.

Some, like Carol Araullo, said she never got a notice to register a second time though she had not changed her address all these years.

“I am disappointed that it was some form of administrative glitch that was the basis to delist me, and many others,” Araullo said.

Swift, in his response to the angry martial law victims, admitted that thousands were delisted due to circumstances beyond the control of lawyers, such as the failure of the postal system to deliver letters in time.

He also explained that the delisting was “outside [his] control,” citing the US court order in 1999 for all original claimants to file new claims.

“They only gave me five weeks. We tried to get the word out, we sent letters to class members, we worked furiously to do that,” Swift said.

He said his group received a couple of thousands of new claimants, and that some who were on the list in 1993 did not receive letters to register again.

“In 2011, when there was finally money to distribute, the court ruled that claimants must have filed both times. There was an order and I have to abide by that order,” Swift said.

“In litigation, you don’t always get what you want. You try hard, but ultimately it’s up to the court to decide that,” he said.

He said he had hoped that the Philippine government, through Republic Act No. 10368, or the Human Rights Victims Reparation and Recognition Act of 2013, would compensate those who were delisted in the class action suit.

Former Commission on Human Rights Chair Etta Rosales, a martial law victim herself, defended the lawyers’ fees that Swift had requested in exchange for working on the class action for over 30 years.

Swift had requested fees equivalent to 30 percent, or $4.125 million, of the $13.75 million granted to members of the class suit.

According to Rosales, the American lawyer deserves to be paid for starting the legal battle back in 1986 against Marcos, which has resulted in monetary compensation for thousands of victims.

“How long ago was that? And this entailed the money of his office, and these entailed travels not only to the Philippines, to Switzerland, and to several other areas,” Rosales said, adding that Swift even “deserves more.”