newsinfo / Headlines
Headlines
‘I’M EXCITED TO DEBATE WITH HER’ 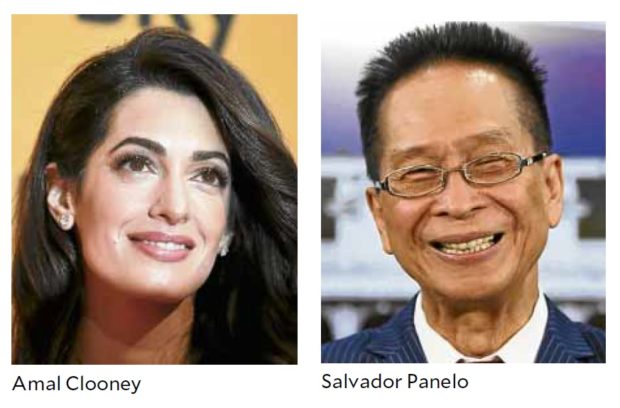 MANILA, Philippines — “They are just looking for someone to be my match.”

Panelo, however, was unimpressed with Clooney, saying she was “misinformed” about Ressa’s case.

“Maybe when we meet, to use the word of the President, I can ‘educate’ her,” he told reporters at Malacañang on Tuesday, commenting on reports that the British-Lebanese wife of Hollywood star George Clooney would be joining Ressa’s legal team.

Still, Panelo said he was “excited to debate with her.”

Ressa, who was named Time “Person of the Year” in 2018 for her journalism, faces several criminal charges along with Rappler in what press freedom advocates have branded an act of “persecution.”

“Maria Ressa is a courageous journalist who is being persecuted for reporting the news and standing up to human rights abuses,” Clooney said in a statement issued by her law firm on Monday.

“We will pursue all available legal remedies to vindicate her rights and defend press freedom and the rule of law in the Philippines,” she added.

Panelo maintained that he was not concerned that someone of Clooney’s stature has taken interest in Ressa’s case.

He said Ressa might have been looking for a lawyer who could be his “match.”

“That’s because if Maria and I get into a debate, she would be pitiful because she isn’t a lawyer. Of course, she would need a lawyer [and she got one] who is pretty and sexy, too,” he said.

Panelo, however, pointed out that Clooney could not appear before any Philippine court since she was not a lawyer recognized by the Integrated Bar of the Philippines, but she could serve as consultant or spokesperson.

He said he did not believe Clooney’s participation reflected the international community’s interest in Ressa’s case.

“She (Ressa) may have just conned Attorney Amal,” he said.

Ressa was arrested twice this year and has accused the President of using prosecutions against her, including ongoing cases of alleged tax evasion and libel, to silence critics and intimidate the press.

The President has branded Rappler a “fake news outlet” and his government insists it is simply enforcing the law as cases pile up against the website publishing reports critical of his brutal war on drugs.

Ressa and Rappler directors and staff face 11 cases, complaints and investigations, which required her to post bail eight times and pay bonds to travel overseas.

“I have been targeted and attacked simply for being an independent journalist. I am delighted that Amal Clooney and her team will be representing me at the international level to challenge the violations of my rights and those of the media organization I represent,” Ressa said in the statement.

Clooney, who was appointed special envoy for media freedom by the British government, also defended two Reuters journalists jailed for more than 16 months in Myanmar and freed in May.

She first tried to intervene in a legal case in the Philippines when she filed a suit in February 2015 in the UN working group on arbitrary detention seeking the release of former President Gloria Macapagal-Arroyo from her hospital detention on plunder charges.

Then Justice Secretary Leila de Lima said Arroyo’s detention was a ruling by the court and the executive department was not involved in determining where she should be held or detained. —With a report from AFP