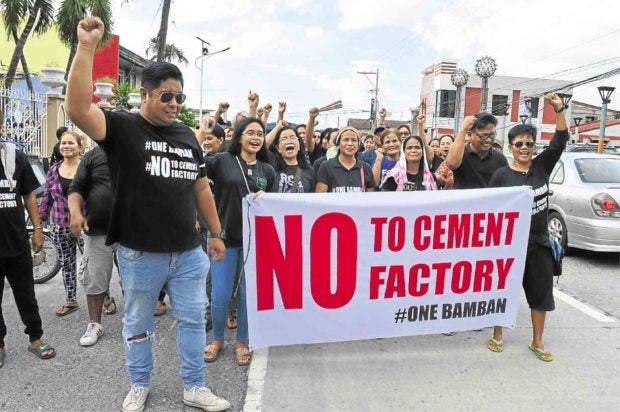 BAMBAN PROTEST Residents of Bamban, Tarlac, protest the establishment of a cement grinding facility in their town due to possible health risks to the community. —MARIA ADELAIDA CALAYAG

BAMBAN, Tarlac, Philippines — A cement manufacturer has backed out of its plan to put up a grinding facility in this town after residents staged a series of protests denouncing the project.

Clad in black shirts bearing the message “No to Cement Factory,” the protesters walked for two hours from Metro Bamban subdivision in Barangay Anupul to Santo Niño Parish in the town proper, where they heard a Mass and lighted candles as part of the culminating protest actions on Saturday.

The protesters said the construction of the cement grinding facility owned by Big Boss Cement would pose health risks to the community where it would be located.

The plant will be built at Sitio Pinandakitan, about 500 meters from San Roque National High School with 4,000 students, said Dianna Lacsamana-Figueroa, president of the Coalition of Concerned Citizens of Bamban (CCCB).

The proposed site is also an agricultural land that traverses four villages.

On June 15, CCCB also led a motorcade around this town to denounce the project.

Bamban Mayor Jose Feliciano on Monday said the cement firm had withdrawn its P6-billion investment for the grinding facility.

He said the protest rallies staged by the residents here had discouraged the company officials.

“Upon learning that the people in Bamban had contested its project, Big Boss Cement backed out,” Feliciano said during Monday’s flag-raising ceremony at the town hall.

He said the firm’s withdrawal had jeopardized some of his projects, which were supposed to be funded from the income the town would get from the facility’s operation.

According to Feliciano, the project is a processing and not a manufacturing plant.

“It means no dust will be let out and no kiln or high intensity heat instruments for burning will be used. This is what they call ‘green cement,’ and German-made machines will be used here,” he said.

“Any plant is hazardous if it’s not compliant with the law,” he said.

The site for the facility was previously classified as agricultural land but was later reclassified as industrial, he said, adding that the company had bought the land from farmers. —Maria Adelaida Calayag