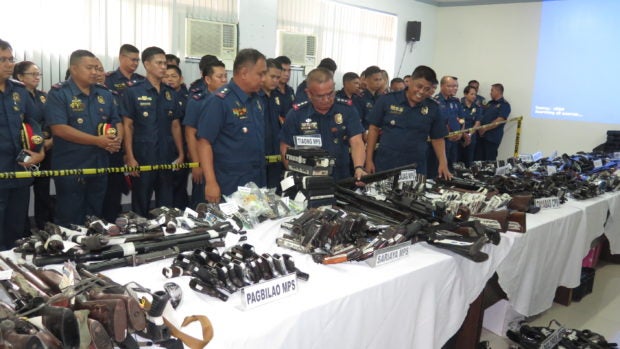 LUCENA CITY –– At least 44 suspected owners of illegal firearms were arrested and more than 800 guns of different calibers were seized and taken into custody by the police in its intensified campaign against loose firearms in Quezon province since March.

Montilla reported that 64 firearms were confiscated in police operations and 797 guns were voluntarily surrendered by gun owners due to expired license and License to Own and Possess Firearms.

“We will intensify our Oplan Katok operation in the coming days. May this serve as a warning to irresponsible gun owners,” Montilla said.

Under “Oplan Katok,” police officers visit the homes of gun owners whose licenses have expired. Police will ask the gun holders to surrender their unregistered firearms and start the license application or renewal process.

Failure to do so, the gun owners would be subjected to search and warrant, and would be charged for violation of the Comprehensive Firearms and Ammunition Regulations Act and Illegal Possession of Explosives Act.

Read Next
DOTr: 17 airport projects finished during first half of Duterte’s term
EDITORS' PICK
Common, mild ailments hit 3,773 Taal evacuees – DOH
Best Gift Ideas in the Philippines
Beyond water service: Maynilad builds massive infrastructure projects to clean up Metro Manila waterways
Outbreak from new virus rises to 440 in China, with 9 dead
DOTr-TWG: Motorbike taxi rider cap in NCR up to 15,000 per firm
Timeless Elegance in the Philippines’ Most Distinguished Home Kitchens
MOST READ
Chinese sex den used lighters to get clients
Villagers, cops given 48 hours to flee Taal Volcano danger zone
Manila roads to be closed on Jan. 24 for Chinese New Year
Teen gets 40 stitches after dog bites her face during photo shoot
Don't miss out on the latest news and information.