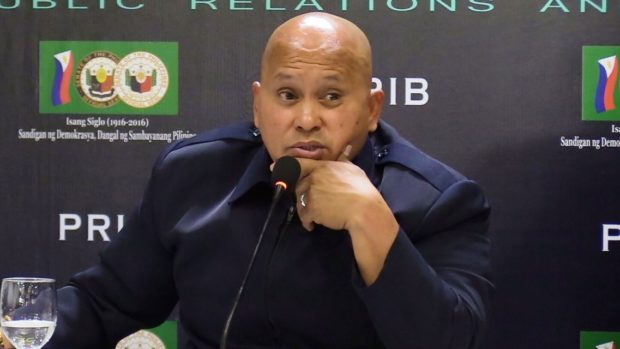 MANILA, Philippines — The killing of a 3-year-old girl in crossfire during a police antidrug operation was an “unfortunate incident,” Sen. Ronald “Bato” dela Rosa said on Monday as he apologized for saying “shit happens” when he earlier commented on the incident.

Dela Rosa also said he would lead an investigation, in aid of legislation, into the death of Myka Ulpina when he assumes the chairmanship of the Senate’s public order and dangerous drugs committee.

Dela Rosa, a former Philippine National Police chief, had drawn flak for saying that while the police did not want to kill civilians during an operation, “shit happens.”

On Monday, Dela Rosa apologized for his “wrong choice of words” and said he meant to say that the incident was “unfortunate.”

“I apologize to the family for [my comment]. It was wrong, I should not have said that. Those words should only be for the police community, not for the public because these were prone to being given a bad meaning,” he said in a television interview.

The girl died in a police raid after her father Renato reportedly used her as a human shield.

Renato and an unidentified suspect reportedly opened fire after recognizing the poseur-buyer as a police officer.

The buyer, Senior Master Sgt. Conrad Cabigao, was also killed in the incident.

Your subscription could not be saved. Please try again.
Your subscription has been successful.
Read Next
Speed up probe of Dinagat exec slay, Palace asks PNP
EDITORS' PICK
vivo Philippines offers a free bouquet of flowers and a premium necklace perfect for Valentine’s Day
Only 38% of students grade 1 to 3 prefer local language as medium of instruction — Pulse Asia
ACT slams Edca on 124th anniversary of PH-American war: ‘Tila hindi umalis ang mananakop’
Omega Speedmaster super racing: Tiny device massive change
House energy committee chair Arroyo bats for cheap electricity
Philippines central bank to focus on inflation at next policy meeting – governor
MOST READ
Pokwang admits she lied about cause of split with Lee O’Brian: ‘Umasa akong aayusin pa niya’
Philippines’ own ‘Anna Delvey’ arrested in Taguig City
OWWA chief Arnell Ignacio: Socmed manager behind post on my love life
Vice Ganda asserts all is well with Karylle, takes swipe at ‘kuya’ who chimed in to be ‘trending’
Don't miss out on the latest news and information.