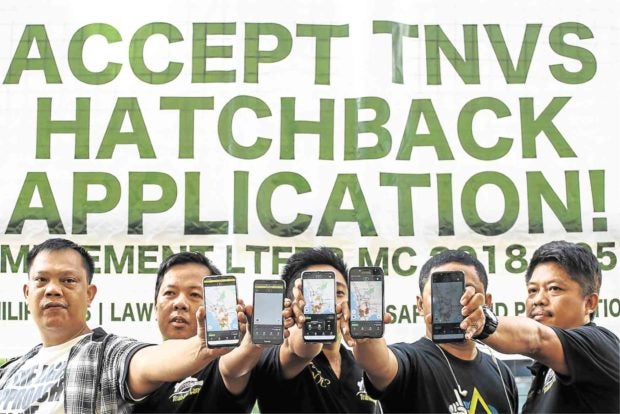 There was no official count of participants in the mass action although leaders of the TNVS community gave estimates ranging from 10,000 to 30,000. But since some of those who took part were drivers who were deactivated last month, the strike did not paralyze ride-hailing services.

Ninoy Mopas, president of TNVS group Thug Philippines, sought to differentiate the holiday from a conventional strike, saying a sizeable number of drivers had continued operating.

“We gave our members and groups the choice to stay online to provide service to the riding public. The ones who are here are probably the ones who were deactivated, operate at night and those who were dismissed,” Mopas said during a dialogue between various agencies.

“This transport holiday did not burden the commuters. If you found it hard to book, honestly, it is harder to book on Mondays because there are only a few drivers,” he added.

Grab, the largest employer of TNVS drivers, also said the strike had no discernible impact on its operations. At
8 a.m., two hours after TNVS drivers had said they would go offline, Grab’s platform was “pretty normal,” according to communications manager Fiona Nicolas.

Different TNVS groups will conduct a much-awaited dialogue with the LTFRB regarding their concerns today. These include charges that the agency was constantly adding new requirements and changing the process for acquiring the provisional authority that TNVS drivers needed to go online.

Read Next
DID YOU KNOW: July 9, 2019
EDITORS' PICK
House energy committee chair Arroyo bats for cheap electricity
Guarding Sara: Why next VP is getting own security team
Beyond the Chocolate Hills: A farm-to-table, heritage culinary adventure of Bohol
WHO says monkeypox is not yet a health emergency
Metro Manila logged most number of new COVID-19 cases — OCTA Research
A massive highway complex makes living in the South highly attractive
MOST READ
Leon Barretto steps up for sisters, asks dad Dennis Padilla: ‘Please stop resorting to public shaming’
Bea Alonzo, under lie detector test, says she wants prenup agreement with future husband
LOOK: Rita Daniela pregnant with first child
Marjorie Barretto to speak up on Dennis Padilla, kids’ relationship ‘in time’
Don't miss out on the latest news and information.