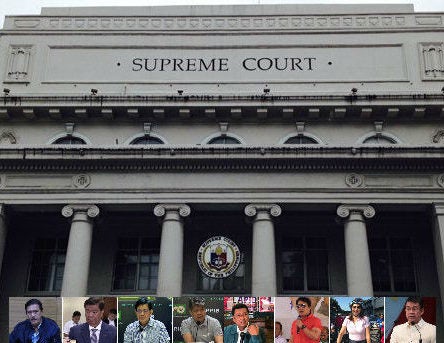 MANILA, Philippines – A group of lawyers and private individuals has asked the Supreme Court to declare as unconstitutional the election of several senators, members of the House of Representatives and local officials who have served beyond the term limit provided under the Constitution.

In a 20-page petition, the group led by Atty. Vladimir Cabigao also urged the High Court to compel the Commission on Elections (Comelec) to strictly implement the term limits of elected officials in the 2022 elections.

Petitioners specifically want the poll body to implement Sections 4 and 7, Article VI, 1987 Constitution by requiring Comelec to deny giving due course to the certificates of candidacy of “termed out” elective officials starting in the next elections in 2022.

Based on the said provision, petitioners said a senator cannot serve for more than two terms of six years each or a total of 12 years, while a member of the House of Representative has a term limit of nine years for three consecutive terms of three years each. After that, they can no longer run for the same office again even after taking a hiatus, said the petitioners.

Read Next
Cop shoots daughter to death in heated argument
EDITORS' PICK
MyCitiHomes premiers PH’s first 3-star certified BERDE District residential development
House energy committee chair Arroyo bats for cheap electricity
NATO to boost troops on high alert to over 300,000
Beyond the Chocolate Hills: A farm-to-table, heritage culinary adventure of Bohol
Congress should review hajj coordination program – Hataman
Protests discouraged but OK if not near inauguration site – PNP
MOST READ
Duterte: It was correct for Bongbong Marcos to ‘decline’ presidential debates
Peso breaches 55:$1, now Asean’s worst performer
Enrile contracts COVID and snipes at critics, foes: ‘I am not going to die yet’
PH firm partners with US corporation to set up weapons assembly in Bataan
Don't miss out on the latest news and information.