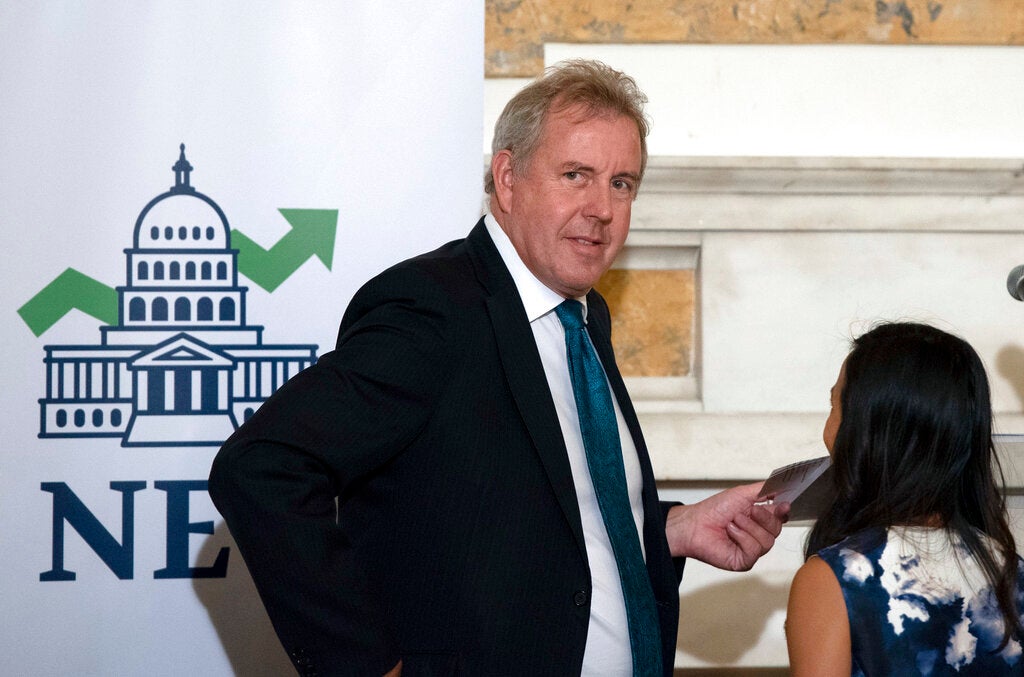 LONDON — Britain’s ambassador to the United States described the Trump administration as “diplomatically clumsy and inept” and said he doubted it would become “substantially more normal,” according to a leaked diplomatic cable published Sunday.

The memo was one of several leaked documents published by the Mail on Sunday in which Ambassador Kim Darroch made highly negative statements about the government of Britain’s closest ally.

Asked about the leaked cables Sunday, President Donald Trump told reporters that Darroch “has not served the U.K. well.”

The United States and the U.K. enjoy what each describes as a “special relationship” that has held strong since World War II. But the ambassador communicated deep unease with Trump’s foreign policies, which have broken with Britain’s on key issues such as climate change and preventing Iran from developing nuclear weapons.

Britain’s Foreign Office did not challenge the authenticity of the leaked documents, which covered the period of 2017 to the present. It called the leak “mischievous behavior” and said the public expects diplomats to provide honest assessments of the politics in the countries where they are posted.

The Foreign Office said the leaks would not harm the productive relationship between the British government and the Trump White House. A formal investigation of the leak may be set in motion in the coming days.

The State Department declined to comment on the ambassador’s comments.

It is customary for senior British diplomats posted overseas to file straightforward memos to senior ministers and security services analysts back home so that political trends and possible threats to British interests can be gauged, but it is unusual for a large number of them to be made public.

Justice Secretary David Gauke called the leak “disgraceful” but said Britain “should expect our ambassadors to tell the truth, as they see it.”

The memos also characterized Trump’s policy on Iran as “incoherent, chaotic.” Trump has frustrated European allies by withdrawing the United States from a complex deal designed to prevent Tehran from obtaining nuclear weapons and has seemed in recent weeks to be on the verge of armed conflict with Iran.

The ambassador said he did not believe Trump’s public explanation for calling off a planned military strike against Iran last month because of concern about possible civilian casualties. He said it is more likely the strike was cancelled at the last minute because Trump felt it would be a liability in the upcoming 2020 presidential election.

Darroch said there are doubts about whether the White House “will ever look competent” and that the only way to communicate with the president is by being simple and blunt.

He said that while Trump had been “dazzled” by British pageantry on a state visit hosted by Queen Elizabeth II in June, the successful visit would not lead to a fundamental shift in Trump’s priorities.

“This is still the land of America First,” he wrote.

Former British Foreign Secretary Malcolm Rifkind said the contents of the leaked cables were not surprising or troublesome but that he was concerned such a large cache of embassy documents had been made available to the newspaper.

“I’m not remotely concerned by what the ambassador said,” Rifkind said. “He was doing his job properly and for the most part, I agreed with his comments.”

Since the memos and telegrams dated back only to 2017, “not that many people will have had access to all the documents and that might help them trace who was responsible,” he said.

Darroch’s views may lead to some awkwardness, especially since Trump said shortly after his election in 2016 that Brexiteer Nigel Farage would make an excellent British ambassador to the United States.

Trump has not hesitated to inject himself into Britain’s political fray, repeatedly criticizing Prime Minister Theresa May’s Brexit negotiating strategy and praising both Farage and former Foreign Secretary Boris Johnson, a strong contender to become the next prime minister.