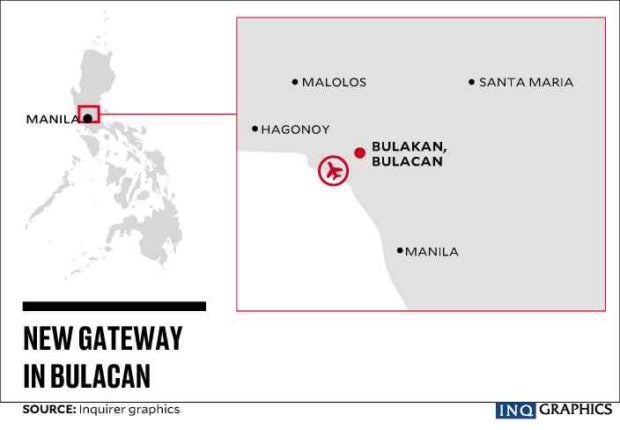 OBANDO, Bulacan, Philippines — The Department of Environment and Natural Resources (DENR) has issued an environmental compliance certificate (ECC) to the company that will put up a P734-billion international airport in Bulacan province.

Lormelyn Claudio, DENR director in Central Luzon, said she approved on June 14 the ECC of Silvertides Holdings, a contractor of San Miguel Corp. (SMC), to develop 2,070 hectares in the coastal villages of Bambang and Taliptio in Bulakan town.

Silvertides has not specified the project that it will build in the area but Inquirer sources said the company had been contracted by SMC to acquire the fishponds from private owners to give way to the airport project dubbed “Aerotropolis.”

SMC earlier said it was readying construction teams for its proposed international air gateway in Bulacan. It said the project was the company’s answer to the worsening air traffic congestion at Ninoy Aquino International Airport.

The ECC issued to Silvertides required the company to strictly observe mitigating measures it presented in the environmental impact assessment.

Silvertides was also asked to come up with measures to address dust dispersion during the development.

Claudio said the construction’s spoils and debris, including hazardous waste generated during construction and development phase, should be properly managed and disposed of by Silvertides.

Local officials said Silvertides already acquired about 2,000 ha of fishponds in Bulakan. Residents in the project site raised concerns of heavy flooding and loss of livelihood when the construction for the project starts.

According to Philkairos Inc., which conducted the environmental impact assessment, the site is situated on a low ground and is flood-prone. The group has recommended building drainage canals during land development to mitigate flooding. —Carmela Reyes-Estrope