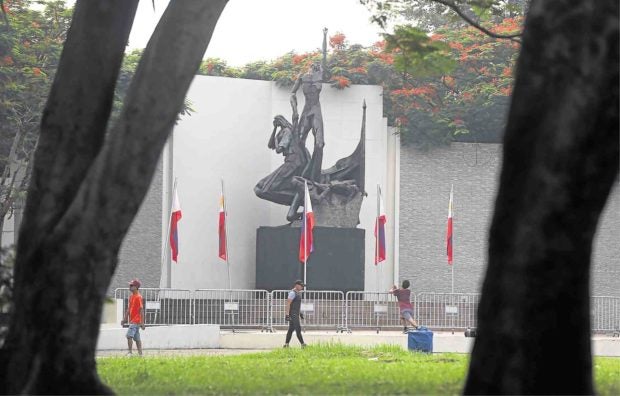 MANILA, Philippines — The “pride of San Juan City” is about to get a P50-million makeover.

Mayor Francis Zamora said the rehabilitation of Pinaglabanan Memorial Shrine, a 5-hectare park built as an homage to San Juan’s pivotal role in the Philippine Revolution, would commence within the first 100 days of his term.

“We will breathe new life into Pinaglabanan Shrine,” Zamora said.

Though little known outside the city, the shrine is steeped in rich and riveting history. Andres Bonifacio and his bolo-wielding freedom fighters stormed the area in 1896 to wrest control of an underground water reservoir, a battle widely viewed as the catalyst for the revolution.

Eduardo Castrillo, the master behind the People Power Monument that towers above Edsa, sculpted the centerpiece of the sprawling memorial grounds — the Spirit of Pinaglabanan — three welded brass figures hoisted above a semicircular stage.

The area is so interwoven with San Juan’s identity that Castrillo’s sculpture is on its official seal.

“It’s something we really have to highlight in our city,” said Zamora, who acknowledged not just the shrine’s historical value but its functional role as the “only real big, open place in San Juan.”

“People old and young are looking for a quiet and peaceful place, and that’s the purpose of the park for all of us,” said Department of Public Works and Highways engineer Louie Ponciano, who is overseeing the rehabilitation project on behalf of the agency.

Ponciano said the park, built in 1973, was dilapidated despite efforts to maintain it.

The “total rehabilitation,” which was being done in coordination with the shrine’s managing agency, the National Historical Commission of the Philippines, was scheduled for 300 days although it could be finished sooner.

The project will include the construction of a perimeter fence and toilets, installation of elevated LED lights and sprinklers, and restoration of the walkway. The fences would enable park officials to better monitor who went in and out, especially at night, Ponciano said.

A draft of the plans showed the sprawling open spaces on the sides of the pathway would be bedecked in palm and fire trees, purple-hued shrubs and red Santan flowers.

Zamora is part of a new crop of chief executives who have pledged to invest in public spaces amid worsening congestion and pollution in Metro Manila, where San Juan is one of the densest cities.

The shrine could be a respite from the chaos, said Ponciano, a place to “refresh one’s mind.”

“I also want to make it a tourist destination,” Zamora said, adding: “It is indeed part of Philippine history.”

Bonifacio and the Katipuneros targeted colonial San Juan for two reasons, said Ayesha Sayseng, officer in charge of Museo El Deposito, one of two museums on the memorial grounds.

The first was to seize firearms from the gunpowder depot El Polvorin. The next was to reach the center of Manila’s waterworks system, El Deposito, where water from Marikina River was sent, readied for drinking, then distributed to the different parts of the capital.

The goal was to cut off the supply of water to Intramuros, where Spanish officials resided, and bring the walled city to its knees. But while they successfully ransacked El Polvorin, the revolutionaries suffered a bloody defeat before reaching the reservoir where the shrine now stands.

“It’s something to be proud of, but not everyone is aware of it,” Sayseng said

The government needed to invest in its historical landmarks, she added, because these public spaces were often the only area where those in a developing country could afford to learn about their history — a necessary pursuit for nation-building.

“Like the tagline of San Juan boasts,” she said. “‘Walang kalayaan kung walang pinaglabanan. (There is no freedom without a battle having been fought).”