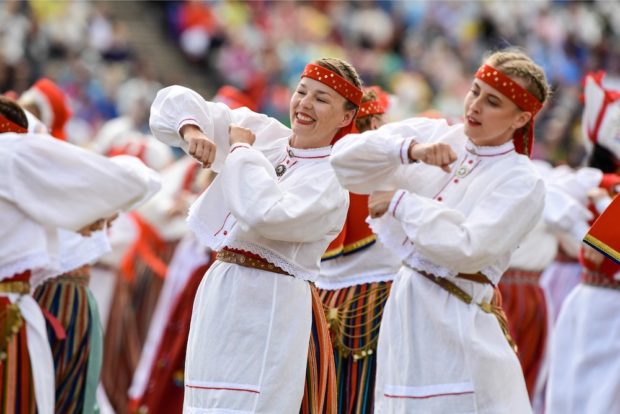 Thousands of Estonians sang together in a massive choir on Saturday, July 6, as the small Baltic nation marked 150 years since the creation of a song festival credited with protecting national identity even through decades of Soviet occupation.

This year’s event in Tallinn includes over 35,000 singers and 11,500 dancers plus musicians, all dressed in colorful regional folk costumes.

Tens of thousands of Estonians from hundreds of choirs competed this past winter to join the giant choir which has been the highlight of the traditional event held regularly since 1869.

Attracting audiences also numbering in the tens of thousands and held every five years, the festival is the largest public gathering in Estonia, a formerly Soviet-ruled state of 1.3 million people who joined the European Union in 2004.

Vikerlased, an LGBT+ choir, created in 2017 as the first of its kind in the Baltic states, performed on Saturday in the main choir for the first time.

“Performing publicly as an LGBT+ choir we are sending a message that it doesn’t matter who you love or who you identify as,” choir member Taavi Koppel, 26, told AFP.

Lilian Tomingas-Frolov, 31, believes that the feeling of unity the festival generates is key to its enduring popularity.

“Singing the national anthem together with tens of thousands of people just feels incredible and bound to make everyone feel something,” she told AFP.

“It is a chance to set aside politics and everyday worries and just sing together,” she added.

The giant festivals were a source of resistance under nearly 50 years of Soviet occupation which ended in August 1991.

All editions of the festival ended with both singers and audiences standing to sing the patriotic song “My Dear Fatherland”.

This was the cradle of what became known as Estonia’s “Singing Revolution”, a string of mass demonstrations against the Soviet occupation that began in 1987 which united 300,000 protesters in song.

In 1991, Soviet tanks failed to crush the independence movement which came to fruition that August.

The songfest can also be viewed on Sunday evening, July 7, via the Estonian public broadcasting company site. HM/JB