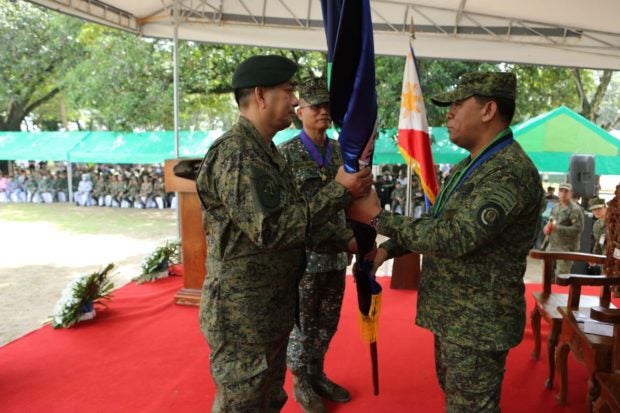 TARLAC CITY, Philippines — For newly installed Northern Luzon Command (Nolcom) chief Maj. Gen. Ramiro Rey, the local communist insurgency is the biggest security challenge in his area of responsibility that he would like to focus on.

(For now, the biggest challenge is the end of the communist armed conflict. That is what the national government is pushing. The campaign has started, and I will focus on that.)

Rey replaced Lt. Gen. Emmanuel Salamat, who is retiring from service next week as he reaches the mandatory retirement age of 56.

The Nolcom is the biggest area command of the Armed Forces, which spans four regions. It also covers the critical areas such as Bajo de Masinloc (Scarborough Shoal) and Benham Rise.

Rey said he has yet to be fully briefed on the situation of the communist insurgency in his area, but he said the solution to this problem is beyond a military approach. The Philippines has one of the longest-running communist insurgencies in Asia.

“Hindi puro away. Kailangan ng tulungan (It’s not all fight, there is a need to help) especially local government executives. The bottom line is good governance,” he said.

The national government has created the National Task Force to End Local Communist Armed Conflict to address the causes of communist insurgency at a local level. (Editor: Eden Estopace)