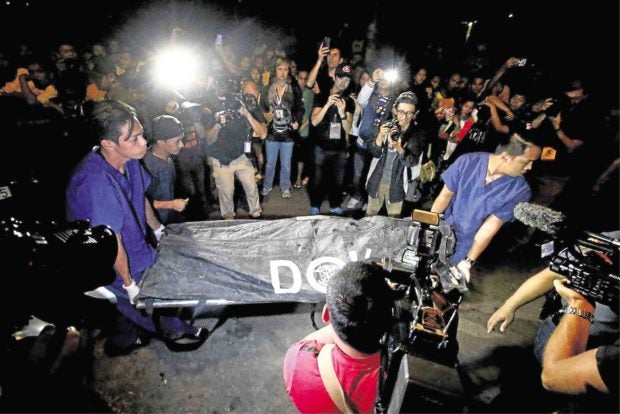 ANOTHER STATISTIC A victim in the war on drugs is stretchered away from a house at Vista Verde Subdivision in Caloocan City in January 2017. —INQUIRER PHOTO

MANILA, Philippines – Malacañang maintained Friday that any investigation of the United Nations (UN) on President Rodrigo Duterte’s drug war would be “interference with” Philippine sovereignty.

Presidential Spokesperson Salvador Panelo said this after Iceland called on the UN Human Rights Council (UNHRC) to investigate the bloody drug war in the country.

“We already made our stand. Any move that will interfere with the sovereignty of this country, the management of this country by a sitting President elected overwhelmingly by the people, to our mind is an interference with our sovereignty,” Panelo told reporters in Malacañang.

“The problem with this, those who initiated it, they are believing in the false news, false information, the false narratives initiated and spread by those who hate the President’s guts and political will, and supported by some questionable members of not media mainstream, but outside of that,” he added.

He said calls for the UNHRC to probe the Philippines’ drug was already an interference.

“Yes, of course. Bakit sila minamanduhan yung isang (Why are they muscling into a) sovereign state?” he said.

Data from the Philippine National Police showed that 6, 600 persons were killed since the administration launched its drug war in June 2016.

“The records are there. [The] official report of the PNP is there, the 5000 plus victims of police operations are recorded who they are, who they were how did it come about, [it’s complete]…,” Panelo said.

(They claim a 27,000 figure and we are asking who were these, where they came from…We don’t know…)

Panelo, who is also Duterte’s chief legal counsel, said police who have committed abuses during operations were being filed charges.

“You know, for every police operation at [there’s a fatality], automatically, [they will be charged]. Dinidemanda agad, eh, yung involved. Kasi may homicide (Because there’s a homicide case), eh. Kaya recorded lahat yun (That’s why these were all recorded),” he said.

Critics having a field day

In a statement, Panelo said “the President’s ardent critics and detractors are once again having a field day by politicizing news reports saying that there would be a resolution coming from the United Nations (UN) which will call for an investigation on the extrajudicial deaths in the Philippines.”

“Our response to such calls is unchanged. No government of any nation knows the actual and real state of our country’s domestic affairs better than this government,” he said.

“Any attempt therefore by any foreign country to interfere with how this government maintains its peace and order, not only is an affront to their intellect but an interference with the country’s sovereignty as well,” he added.

“To those foreign governments which have been misled by false news and untruthful narratives about the President’s war against illegal narcotics,” he reiterated “that drug-related deaths arising therefrom are neither state-initiated nor sponsored.”

He said “these drug-related deaths are consequences of police operations when the subjects violently resist arrest that endangers the lives of the law enforcers who act on self-defense, which is sanctioned by law.”

“Violent encounters during police operations,” he cited, “are not extraordinary since illegal drugs alter the psychological makeup of those pushers and users hence the violent resistance.”

He said “almost a hundred policemen have died in the process of these police operations while seven hundred plus of them have been seriously injured.”

He further said that “another cause for these deaths is when those who surrendered rat on the members of the drug syndicate,” adding that “botched drug deals among syndicate members result into killing each other.”

“These are inevitable results when a government is sincere about ridding illegal drugs in its country and when a President has the political will to provide a safe and secure environment for his constituents,” he said.

He assured the public “that no one is above the law in our country,” saying “abusive police officers are not tolerated by this administration and must face the corresponding punishment of their unlawful actions.”

“With respect to the pulse of the Filipinos, a survey conducted late last year showed that eight out of ten of them are satisfied with this administration’s campaign against illegal drugs,” he said.

“This can only mean that Filipinos feel safer as the rate of criminality has substantially declined to a remarkable low for indeed, a significant most number of our country’s felonies are drug-related,” he said.

The cited that the “Philippines has working mechanisms and domestic processes, including those adopted by our law enforcement sectors and inter-agency groups, to address this aspect in our bout against prohibited drugs. We also have a robust judicial system which soundly operates.”

“These are among the reasons why we have been urging those who claim to be victims of police abuse to file cases so their respective grievances can be redressed by this government accordingly.”

“Instead of collaborating with personalities belonging to the opposition, who are without authority to resolve their complaints and will only politicize their sufferings,” he said, “we ask them to come forward so we can give them the proper assistance to attain the justice which they seek.”

He reiterated that the Duterte administration respects human rights.

“The fact that the Philippines during the term of PRRD has been elected to the UN Human Rights Council with 165 out of 192 votes at the UN General Assembly bespeaks the growing appreciation of the international community on our policies with respect to human rights,” he said.

“Even as we expect this latest demonization attempt against the President and this administration to fail, we ask some state-members of the UN to be more circumspect in evaluating reports concerning the domestic affairs of other countries in order that they may demonstrate respect to the latter’s sovereignty and independence,” he added.