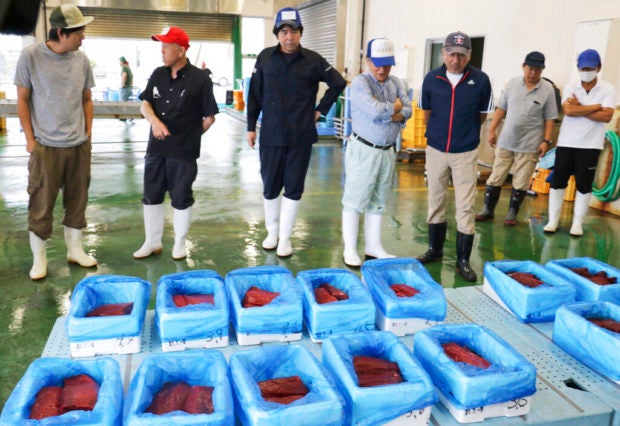 The fresh meat sold for up to 15,000 yen ($140) per kilogram, several times higher than the prices paid for Antarctic minkes, at a wholesale market in Sendai, one of several cities on Japan’s northern coasts to hold the auction.

The meat came from two minkes caught by a fleet of five catcher boats off the northern city of Kushiro on Monday when Japan resumed commercial whaling after 31 years. During those years it conducted research hunts in the Antarctic and the northwestern Pacific that conservations criticized as a cover for banned commercial hunts.

Japan left the International Whaling Commission on June 30 and has promised the whalers will stay within its 200-mile exclusive economic zone waters. The Fisheries Agency set the catch quota through the end of the year at 227 whales — fewer than the 627 Japan had hunted in those distant waters for its research program in recent years.

Separately, 66 kilograms (145 pounds) of whale meat was auctioned in Taiji, one of the traditional whaling towns also known for its dolphin hunts that were shown in the documentary film “The Cove.”

Meat from whales hunted by the other fleet in the Antarctic will be frozen and distributed separately.

“They were celebration prices for a special occasion,” said company spokesman Masamitsu Sato, referring to the prices that are significantly higher than those of whales hunted in the Antarctic. He expects the prices to drop to “appropriate levels” to attract a wide range of consumers.

Despite the good start, whaling communities are uncertain about the future and whether their business is commercially viable after a decadeslong hiatus.

“We are all worried if our businesses can be profitable,” Sato said.

While the resumption of commercial whaling was condemned by many conservation groups, others see it as a face-saving way to let the government’s embattled and expensive whaling program gradually succumb to changing times and tastes.

Whale meat sellers are also worried about slim demand. Whale meat was an affordable source of protein during the lean times after World War II, with annual consumption peaking at 223,000 tons in 1962, but whale was quickly replaced by other meats. Today, annual supply is down to about 4,000-5,000 tons, according to the Fisheries Agency. /ee

Read Next
CHR: Collateral damage in police operations must not be dismissed
EDITORS' PICK
Smart 5G goes live
Water remains our saving grace right now
PNP: Checkpoints back in MECQ areas
Been there, done that but what’s the difference between MECQ and GCQ?
BREAKING: 3,226 latest COVID-19 cases bring PH’s total to 106,330
A gem of a residence in the new normal
MOST READ
MECQ guidelines in infographics
Doctors group to Duterte: ‘There was never a call for a revolt’
MECQ in NCR, other areas: Mass transportation suspended, quarantine pass required anew
Duterte heeds frontliners’ plea, reimposes MECQ in Metro Manila, other areas Aug. 4 -18
Don't miss out on the latest news and information.