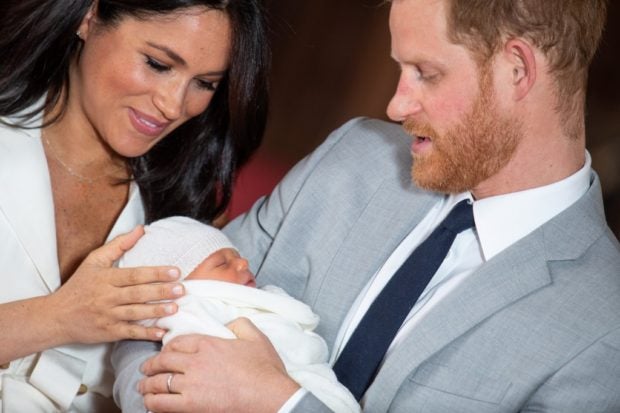 Prince Harry (R) and his wife Meghan (L) pose for a photo with their newborn baby son, Archie Harrison Mountbatten-Windsor (C), in St George’s Hall at Windsor Castle in Windsor, west of London on May 8, 2019. Image: Pool/Dominic Lipinski via AFP

Prince Harry and his wife Meghan will christen their baby boy Archie on Saturday, July 6, at a private ceremony at Windsor Castle and will not disclose his godparents’ identities, Buckingham Palace said.

The widely-expected decision to keep the event out of the public eye had already been condemned by Great Britain’s boisterous press and the army of royal commentators who dissect every palace move.

Meghan, the former American television star turned Duchess of Sussex, has only made a handful of public appearances since giving birth to Archie in May.

The royal couple kept details of the birth private and avoided the kind of media scrutiny traditionally lavished on senior members of one of the world’s most famous families.

Harry and Meghan “cannot have it both ways,” Penny Junor, a veteran royal watcher who has penned a biography on Harry, wrote in The Sunday Times. “Either they are totally private, pay for their own house and disappear out of view or play the game the way it is played.” HM/JB