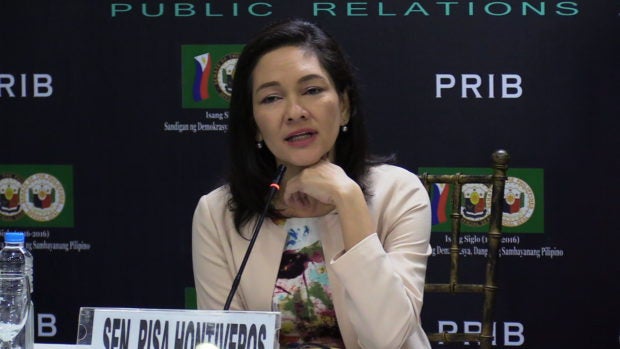 “President Rodrigo Duterte and Chinese President Xi Jinping may have had a spit-in-the-hand verbal agreement over our Exclusive Economic Zone (EEZ), but it is non-binding,” the senator said in a statement on Thursday.

“Even Foreign Affairs Secretary Teddy Boy Locsin rejected the so-called verbal agreement, saying that it is unenforceable and that the President may have been led to believe by his legal advisers that our country can allow other countries to fish in our EEZ,” she added.

After Duterte recently said that China can fish inside the country’s EEZ on the West Philippine Sea out of friendship, critics have denounced him, saying that he can be impeached for not protecting the country’s territory.

However, Duterte claimed that there was a prior agreement with the Asian superpower in 2016 — which Malacañang said was done verbally.

After these remarks, several officials including Locsin — Duterte’s appointee — and Senator Franklin Drilon claimed that such deals, if not on paper, cannot be implemented.

“The verbal agreement cannot be enforced because it’s verbal, exactly as (Senator) Frank(lin) Drilon said that you need a document to prove an agreement. It’s just the way it is,” Locsin said in an interview with ABS-CBN News Channel on Wednesday.

The senator, who belongs to the opposition bloc, vowed to persuade other senators to conduct a parliamentary oversight on the executive’s foreign policy, asking Malacañang to divulge the details of the deals.

“The Senate has been granted by the Constitution the power to ratify treaties and in line with its check and balance powers, it has a material interest in ensuring that the foreign policy adopted by the President and the agreements he enters into with other nations are in the best interest of Filipino citizens,” Hontiveros explained.

“I, therefore, call on Malacañang to fully explain the details of this so-called verbal agreement and if this is part and parcel of the government’s official foreign policy in dealing with China and in handling the issues surrounding the West Philippine Sea. Such an agreement would be grossly unconstitutional and a betrayal of our historic victory at The Hague,” she added.

She also insisted that the EEZ belongs to the Philippines, as based on the 1987 Constitution.