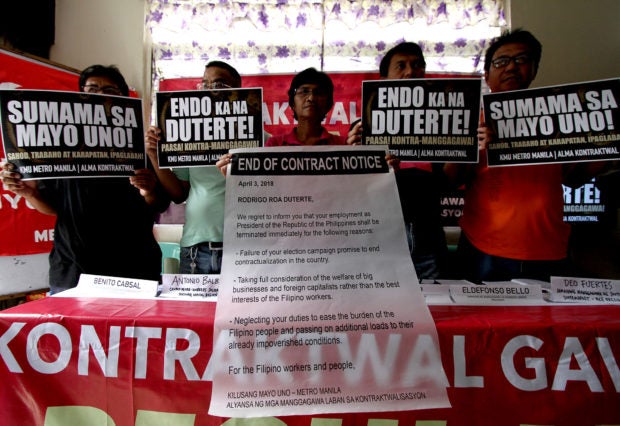 Leaders of labor groups demand an end to contractualization. —RICHARD A. REYES

MANILA, Philippines — A bill that would prohibit all illegal employment schemes and subcontracting of Filipino workers has been transmitted to Malacañang and is now awaiting the signature of President Rodrigo Duterte, Labor Secretary Silvestre Bello III said.

In a statement issued by the Department of Labor and Employment (DOLE) on Thursday, Bello said the Presidential Legislative Liaison Office (PLLO) told him that the Security of Tenure (SOT) bill has been enrolled and sent to the Palace last Friday.

“We are anticipating the signing of the SOT Bill, which is landmark legislation under the Duterte administration,” the labor chief said.

“Ensuring the workers’ security of tenure is among the priorities of our President and we are hopeful that the President will soon sign the bill into law to enhance the enjoyment of their constitutional rights to job security,” he added.

Bello also said that he submitted a recommendation for the enactment of the bill early this week.

The proposed law, he said, would “strengthen workers’ security of tenure by prohibiting unlawful contracting arrangements, and provide penalties for its violations.”

The proposed measure, which the President certified as urgent in September 2018, was approved on third and final reading in May at the Senate.

The House of Representatives later adopted the Senate’s version of the bill dispensing the need for a bicameral conference committee to reconcile the two versions.

The bill would lapse into law if not acted upon within 30 days after being transmitted to Malacañang.