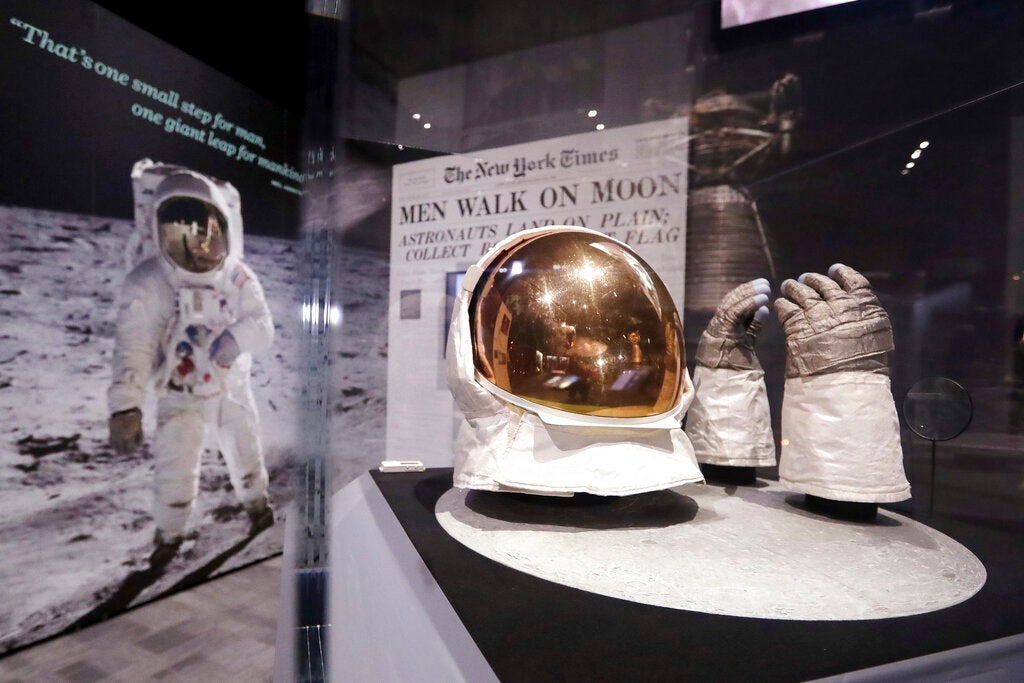 In this April 11, 2019 file photo, Buzz Aldrin’s outer visor and gloves worn while walking on the moon are displayed near a photo of Aldrin at Destination Moon: The Apollo 11 Mission exhibit at the Museum of Flight in Seattle. The exhibit celebrates the 50th anniversary of the U.S. manned moon landing on July 20, 1969. (AP)

You can run a race, hit a museum, shoot off a rocket or count down to the moment 50 years ago that Neil Armstrong first stepped foot on the moon.

There’s no shortage of events and exhibits celebrating the historic moon landing. Museums, galleries, concert halls, movie theaters and towns with an Apollo 11 connection will be marking the anniversary over the next few weeks, particularly for the July 16 launch, July 20 moon landing and July 24 splashdown.

In downtown Wapakoneta, Ohio — Armstrong’s birthplace — the festivities include the Moon Festival Pageant, a Run to the Moon race and a “Wink at the Moon” concert, a nod to his family’s request after Armstrong died in 2012.

In Huntsville, Alabama, where the Saturn V rocket was developed, there’ll be dancing in the streets. Residents will moonwalk down the roads of “Rocket City,” reliving the day they danced in the streets in 1969.

The U.S. Space and Rocket Center is also going for a world record. On July 16 at 8:32 a.m. local time, exactly 50 years after Apollo 11 astronauts blasted off for the moon, the museum will attempt to set a Guinness World Record by launching 5,000 model rockets simultaneously.

“It’s going to be epic,” said Pat Ammons, spokeswoman for the museum and its popular space camp. The cardboard rockets will be set up in circles representing the five F-1 engines that propelled Saturn V into space.

The museum has also invited space fans around the world to launch their own rockets that day. So far, people from 29 countries have joined, including Argentina, Vietnam and China, Ammons said.

NASA will mark the occasion on the eve of the landing anniversary with a live, 1 ½-hour broadcast on NASA TV from several sites, including Kennedy Space Center in Florida, the launch site for Apollo 11 crew of Armstrong, Buzz Aldrin and Michael Collins.

The Astronaut Scholarship Foundation is throwing an astronaut golf tournament, astronaut parade and astronaut pub crawl in Florida. And there’s nowhere better to learn about the moon landing than the Wings Over the Rockies Air and Space Museum’s weeklong “Apollopalooza ” in Denver.

Peanuts character Snoopy will make appearances in his astronaut regalia at Comic Con in San Diego and at Space City in Toulouse, France for the countdown to man’s first steps.

Can’t join Snoopy? NASA’s Johnson Space Center in Houston and the Armstrong Museum in Wapakoneta will do public countdowns as well. And as part of their weeklong celebrations on the National Mall, the Smithsonian National Air and Space Museum will host “The Eagle Has Landed ,” a free late-night celebration with scavenger hunts, stargazing and a countdown.

Some of the world’s famous art galleries are also joining in the fun. Iconic and some rare drawings, paintings, films, astronomical instruments, photographs and even cameras that were flown in space will go on display.

New York’s Metropolitan Museum of Art will open five galleries bedecked with images of the moon dating from the dawn of photography in the 1830s. And the National Gallery of Art in Washington is putting together an exhibit celebrating a century of lunar photographs including the earliest lunar images by Warren de la Rue and Lewis M. Rutherford.

For a history crash course, theaters and museums are bringing the Apollo 11 mission back to life.

The National Air and Space Museum will have Armstrong’s refurbished spacesuit out for the first time since 2003. It also put statues of his spacesuit in baseball stadiums around the country. A Smithsonian exhibit featuring the Apollo 11 command module that flew astronauts to the moon is now on display at Seattle’s Museum of Flight and travels to Cincinnati this fall.

Beginning Monday, the public can visit NASA’s Apollo-era Mission Control in Houston that was recently restored to the way it looked 50 years ago.

“I think it conveys a great history of what humans have been able to accomplish,” said Tracy Lamm of Space Center Houston.