Trump vows July 4 ‘show of a lifetime’ as protesters gather

WASHINGTON – A reality TV host at heart, President Donald Trump is promising the “show of a lifetime” for the hundreds of thousands of revelers who flock to the National Mall every year on the Fourth of July.

The tanks are in place for the display of military muscle and protesters are ready to make their voices heard. 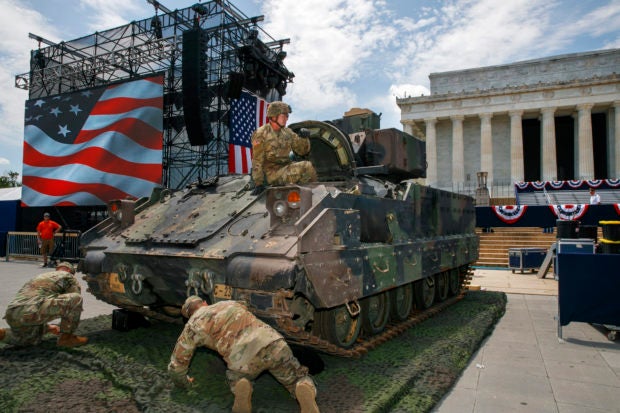 An Army soldier hops out of a Bradley Fighting Vehicle after moving it into place by the Lincoln Memorial, Wednesday, July 3, 2019, in Washington, ahead of planned Fourth of July festivities with President Donald Trump. (AP Photo/Jacquelyn Martin)

It’s been nearly seven decades since a president spoke there on Independence Day.

The U.S. was at war in Korea when Harry Truman addressed a large gathering on the Washington Monument grounds, marking the 175th anniversary of the signing of the Declaration of Independence.

There’s no such historical marker Thursday for Trump, who for the past two years has sought a moment to orchestrate a display of America’s military prowess.

He’s calling his event a “Salute to America,” honoring the armed forces, and he’ll speak at the Lincoln Memorial in front of a ticket-only, VIP crowd of Republican donors, administration and campaign officials, family members and those who flock to see him or protest what they see as a divisive intrusion on a traditionally unifying national holiday.

Trump sounded a defensive note Wednesday, tweeting that cost “will be very little compared to what it is worth.”

“We own the planes, we have the pilots, the airport is right next door (Andrews), all we need is the fuel,” he said, referring to Maryland’s Joint Base Andrews, home for some of the planes that are to fly over the Mall on Thursday.

“We own the tanks and all. Fireworks are donated by two of the greats.”

Trump glossed over the expense of shipping tanks and fighting vehicles to Washington by rail and guarding them for several days, and other costs.

Some of the president’s supporters welcomed Trump’s stamp on the holiday.

Rachel McKenna, a Trump supporter from McKinney, Texas, said her relatives have served in the military and she thought it was important to say “‘We love you guys, we appreciate everything you do, and I love the fact I can see that,” as she pointed to the Bradley fighting vehicle positioned near the Lincoln Memorial.

Under White House direction, the Pentagon was arranging for an Air Force B-2 stealth bomber and other warplanes to conduct flyovers.

The White House referred questions about the cost of the military participation to the Pentagon, which said it did not have the answer.

The Air Force said it costs $122,311 an hour to fly a B-2 bomber, which is making the round trip from its home at Whiteman Air Force Base in Missouri. Officials said the flight will be considered a training event, with the cost already budgeted. The per-hour flying cost of the F-22 fighter is $65,128.

Two Bradley fighting vehicles were in place Wednesday at the Lincoln Memorial, where Trump will speak. In addition, two 60-ton Army Abrams battle tanks were sent to Washington by rail to be positioned on or near the National Mall, to the dismay of District of Columbia officials.

The presidential Air Force One and Marine One aircraft are also slated to make aerial appearances. /gsg