Military: No coup d’état against the Duterte administration 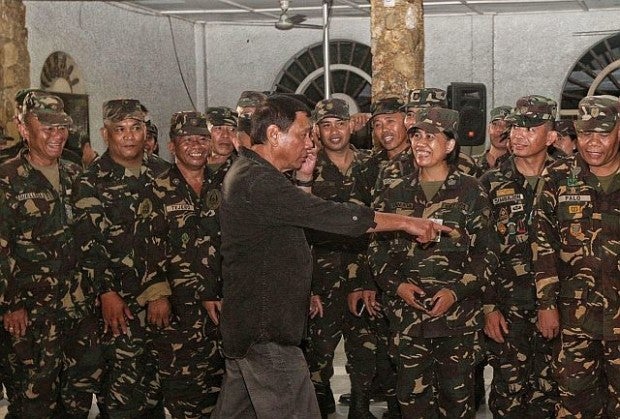 DAVAO CITY — The Armed Forces of the Philippines (AFP) on Wednesday played down the remarks of President Rodrigo Duterte, who pleaded state forces not to stage a coup d’état against him.

“We have, time and again assured him, as we reassure him today, that we in the AFP shall constantly and will remain loyal to the flag, to the Constitution, and to the Filipino people whom we swore to protect with our lives,” he said in a statement.

At the Philippine Air Force anniversary on Tuesday, Duterte asked the military and police not to stage a coup during his term.

“Do not do it please during my term,” he said.

“I told you before all you have to do kung ayaw ninyo ako, do not bring your weapons and mechanized armors there. Just call me and we’ll have coffee and I am ready to say, ‘It’s yours for the taking,’” he added.

Arevalo said the President has given more than what they can hope for like increasing their salary, allowances, and benefits.

“We were given more than what we can ask for from a President and Commander-in-Chief who has shown genuine care and concern to his soldiers, airmen, sailors, and marines,” he said.

AFP “is comprised of professional and matured servicemen and women who are patriots and loyal to the constitution and the duly constituted authorities. We have learned our lessons from the past and we shall live with it,” he also said. (Editor: Katherine G. Adraneda)