Hawaii law on prostitution convictions is 1st in nation 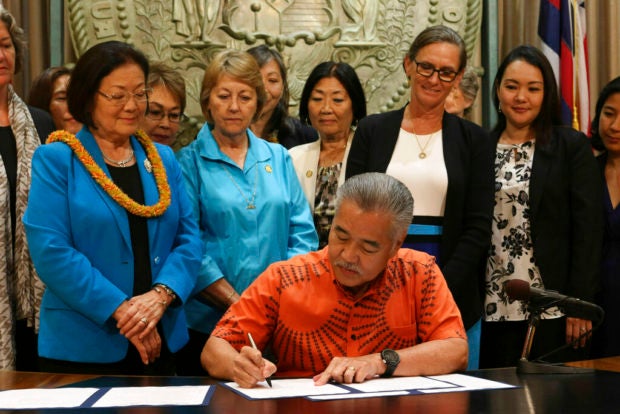 HONOLULU — Hawaii on Tuesday became the first state in the US to remove a requirement that a person be a victim of sex trafficking to have a prostitution conviction erased.

Victim advocates say most trafficking victims aren’t able to reveal or prove they’re victims because they fear their pimp or sex buyer will retaliate. They may depend on their pimp or trafficker for their livelihood. Ige called the proof of victimization requirement “unrealistic.”

The legislation passed unanimously in the state House and Senate, which are both dominated by Democrats.

Nationwide, the average age someone enters the sex trade is about 13, advocates say. It’s similar in Hawaii, but advocates say trafficking is a bigger problem in the islands because of the large tourism industry and military population.

Tammy Bitanga was 15 when she was trafficked into the sex trade in Waikiki after running away from her foster home.

She met an older boyfriend who had her selling sex in Waikiki, then sent her to Alaska where she worked in gentlemen’s clubs and escort services. She left when she got a ride to the airport and a relative bought her a plane ticket back home. She now works for a nonprofit that helps girls recover from being trafficked.

Bitanga was never arrested and doesn’t have a criminal record. But she supports the legislation for others, as a conviction on your record makes it that much harder to leave prostitution behind, she said.

“You have this thing stuck on you. And then it’s like, ‘OK, well, the only job I’m going to get is to go back to that life. Because I’m already there,'” she said.

Previously, the law allowed sex trafficking convictions expunged after six years, but only with proof of victimization.

“In 2019, the days of the scarlet letter are over,” said state Sen. Laura Thielen, a Democrat representing Kailua and Waimanalo. “People who have been in prostitution should not have an onerous burden on them once they leave that job, to be able to vacate their record and be able to have access to other employment.”

Khara Jabola-Carolus, the executive director of the Hawaii State Commission on the Status of Women, said 80% of women in prostitution in Hawaii were trafficked into it.

Voluntary prostitution is extremely rare, according to IMUAlliance, one of the state’s largest victim service providers.

The organization says it has helped 135 victims escape sex slavery over the past 10 years. Each suffered “complex and overlapping trauma” including post-traumatic stress disorder, depression and anxiety and substance abuse, the group said.

“A 14-year-old doesn’t wake up and say, ‘I want to be a ho.’ Right? Somebody coerced her into it. Somebody fraudulently enticed her into that lifestyle,” Bitanga said.

“However you get involved in it, the bigger question is: When you’re ready to get out, shouldn’t you have that opportunity to get out?” /ee