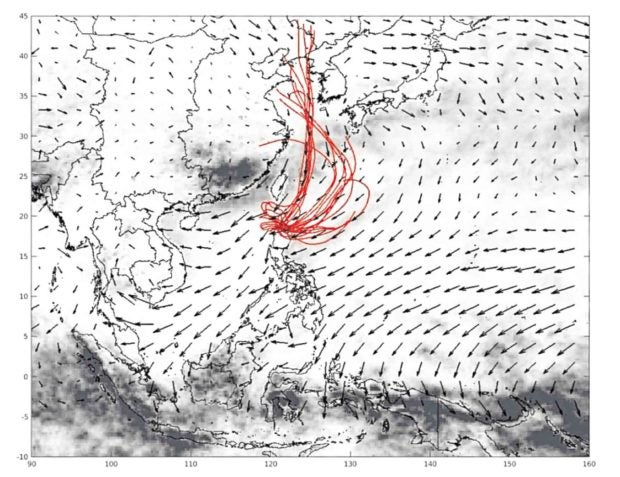 DIRTY AIR Polluted air from China’s massive industries and huge numbers of vehicles has reached the Ilocos region, blown by northeast monsoon winds from March to May as shown in this illustration in a 2018 study published by the Atmospheric Chemistry and Physics journal.

MANILA, Philippines — Seasonal winds are blowing polluted air from China to the Philippines, and this could affect the health of rural communities at the northwestern tip of the country even though they are quite distant from industrial activities, according to a Filipino scientist.

“But what is more alarming is the presence of heavy metals in the samples … These come from industrial activities,” said Mylene Cayetano, head of the Environmental Pollution Studies Laboratory of the University of the Philippines’ Institute of Environmental Science and Meteorology (UP IESM).

Cayetano was involved in a study that looked into the movement of pollutants.

Samples taken from Burgos, a fifth-class municipality of about 9,000 in Ilocos Norte province with no heavy industries, showed that the air in the town contained microscopic particulate matter (PM2.5) from man-made emissions—fine particles that could cause serious health problems, such as lung diseases.

The components produced from industrial emissions and burning of solid waste from China included heavy metals, such as lead and cadmium, and chemical compounds, such as sulfate, nitrate and ammonium.

High exposures to lead and cadmium can cause respiratory, cardiovascular and neurologic damage to the body. These toxic metals are also considered carcinogenic.

Published in the Atmospheric Chemistry and Physics journal last year, the study found that over a third, or 34 percent, of the sampled fine particulates came from long-range transport (LRT) of industrial emissions, solid waste burning and secondary sulfate from East Asia, particularly from China.

To the authors’ knowledge, this study is the first of its kind to analyze the aerosol or smoke characteristics in this region and the first to confirm that the emissions from China had reached the Philippines.

They chose Burgos for the study since the research wanted to look into the presence of PM2.5 in areas where there is little economic activity, Cayetano told the Inquirer on Tuesday.

PM2.5 is finer than a strand of hair at 2.5 microns in diameter and can be made up of hundreds of different chemicals. While some are naturally occurring like dust, these particulates are most commonly known as pollutants that come from human activities, such as burning fossil fuels in cars and in energy production.

Along with main author Gerry Bagtasa, also of the UP IESM, and Chung-Shin Yuan of the Institute of Environmental Engineering of National Sun-Yat Sen University in Taiwan, Cayetano collected 24-hour samples of fine aerosol during China’s four seasons (winter, spring, summer and fall) from 2015 to 2016.

Chemical analyses were done in a laboratory in Taiwan, where the scientists identified the chemical fingerprints and composition of the samples. Wind and receptor model analyses were used to quantify the levels of air pollution, determine its source, and check its seasonal variation.

The study showed that the highest PM2.5 concentration was recorded during China’s spring, which is from March to May in the Philippines. During this period, the northeast monsoon wind, locally known as “amihan,” prevails over the country and blows emissions from East Asia to the Philippines.

The highest PM2.5 concentrations were recorded at more than 34 micrograms per cubic meter. This was higher than standards set by the World Health Organization for PM2.5 for a 24-hour period, though lower than the national standards.

“It is already an established fact that pollution doesn’t know boundaries,” Cayetano said, noting other East Asian countries like Japan and South Korea were also suffering from pollutants from China.

Cayetano and Bagtasa received their doctoral degrees in South Korea and Japan, respectively, where they had also extensively studied the LRT pollutants from China to the other East Asian countries.

“It’s challenging for South Korea and Japan because no matter how much they try to clean the air for their residents, they have a neighbor who continues to pollute,” Cayetano said. She cited other studies that showed pollutants from China had reached as far as the other side of the globe, specifically California.

She said that whether the air pollution from China would travel further down from the Ilocos region depended on the wind and atmospheric pressure.

“By then, it would be difficult to delineate, for example, in Metro Manila, where we are already dealing with a lot of pollution from our own doing,” she said.

MRT lists the whereabouts and whenabouts of infected ticket sellers