Moreno: I was offered P5M daily to stop drive vs vendors 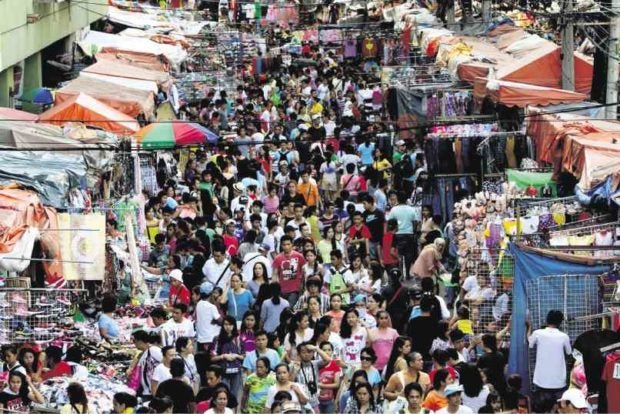 This photo, taken in December 2015, shows shoppers and sidewalk vendors taking over the main road in Divisoria, Manila, as vehicles are relegated to side streets. (File photo by RICHARD A. REYES / Philippine Daily Inquirer)

MANILA, Philippines — Manila Mayor Isko Moreno said he was offered bribes ranging from P5 million a day to P1.8 billion a year to drop his promise to get vendors out of the main roads of the national capital.

“May nagpaparating lang sa akin na mensahe: P5 million daw a day, P150 million a month, P1.8 billion a year. Ngayon, whether it is true or not, I don’t know,” Moreno said in a press briefing at the Manila City Hall on Tuesday. “Para dating gawi.”

[Somebody relayed to me the message: They will give me P5 million day, P150 million a month, P1.8 billion a year. Now, whether that is true or not, I don’t know. It’s like the same old system.]

Moreno said he would stick to his promise.

“We will be consistent, persistent in putting order in the City of Manila,” he said “Ibabalik ko ang kalsada sa mga taga-Maynila.”

[I will give back the streets to the Manila residents.]

WATCH: This is what the Divisoria street looks like on Tuesday, July 2, after the extensive clearing operations led by Manila Mayor Isko Moreno Domagoso on Monday, July 1.📹 | Melanie Ignacio