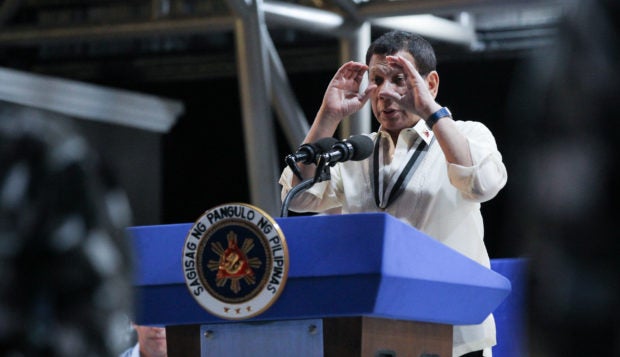 President Rodrigo Duterte delivers a speech during the 122nd anniversary of the Presidential Security Group (PSG) at the PSG Compound on June 26, 2019. (File photo by YANCY LIM / Presidential Photographers Division)

MANILA, Philippines — President Rodrigo Duterte appealed on Tuesday to the Armed Forces of the Philippines (AFP) and the Philippine National Police (PNP) to refrain from staging a coup d’etat during his term.

“Do not do it, please, during my term,” he said in his speech at the celebration of the 72nd anniversary of the Philippine Air Force at Villamor Air Base in Pasay City.

“I know that the Armed Forces and the police will have to decide one day, somehow,” he added.

He told the military and the police he did not want violence and that if they would want to oust him, they could call him, as he would be willing to give them the power.

“I told you before: Kung ayaw ninyo ako, do not bring your weapons and mechanized armors there. Just call me and we will have coffee and I am ready to say: ‘It’s yours,’” he said.

The President also assured the AFP that his administration would continue supporting its modernization program.

“I assure you that this administration will continue to pursue all efforts to enhance your capabilities against these threats through modernization and capacity building initiatives such as the Military Pilot Training and your conduct for all qualified student officers, thereby assuring a strong future for our Air Force,” he said.

“And during my time, I have never said no to any of the commanders and to [Defense Secretary] Delfin Lorenzana and to Secretary [Hermogenes] Esperon all the things that they wanted for our Armed Forces even to the police,” he added.