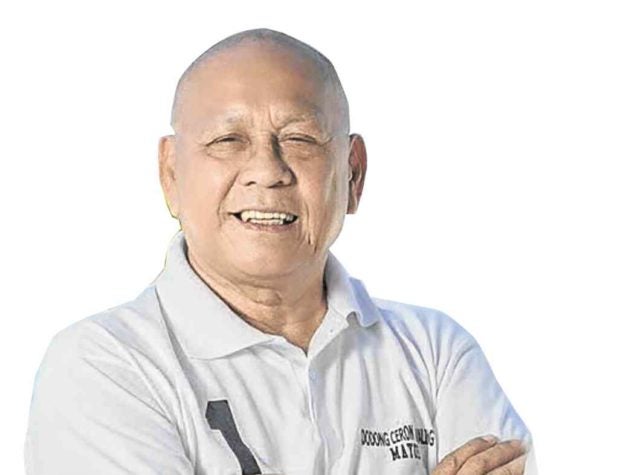 THERE IS NO LEGAL BASIS TO STOP ME FROM ASSUMING MY POST AS THE DISMISSAL ORDER IS NOT YET FINAL  Ciceron Cawaling Mayor of Malay, Aklan

ILOILO CITY, Iloilo, Philippines — Two officials of Malay town in Aklan province are occupying the position of mayor after Mayor Ciceron Cawaling refused to vacate his post despite the vice mayor assuming as acting mayor.

Cawaling refused to recognize a Department of the Interior and Local Government (DILG) advisory that barred him from assuming his post due to an Ombudsman dismissal order.

Cawaling went to his office on Sunday afternoon to start a three-year term.

On Monday morning, Vice Mayor Frolibar Bautista took his oath as acting mayor after he was served the DILG advisory.

Bautista, Cawaling’s running mate in the May 13 elections, said he would hold office at the vice mayor’s office.

The DILG earlier said Cawaling could face criminal and administrative liabilities if he insisted on assuming office while Bautista could also be held liable if he failed to assume as acting mayor.

DILG Western Visayas Director Ariel Iglesia earlier said in an advisory that there was a “temporary vacancy” in the post of municipal mayor of Malay because the Ombudsman had dismissed Cawaling from service.

The Ombudsman had found Cawaling guilty of grave misconduct, gross neglect of duty, conduct unbecoming of a public official in relation to his alleged failure to implement national laws and local ordinances protecting the environment and regulating construction activities on Boracay Island in Malay.

The dismissal, which can still be appealed to the Supreme Court, carried an accessory penalty of forfeiture of retirement benefits and perpetual disqualification from government service.

Cawaling insisted that there was no legal basis to stop him from assuming his post, as the dismissal order was not yet final. He said he was a duly elected mayor who had been proclaimed by the Commission on Elections and had taken his oath of office.

DILG Aklan Director Roy Defiño said they would advise department heads of the Malay government and the town’s depository banks on whom to recognize as mayor.

Read Next
Court convicts gunman in Dutch activist’s slay in 2012
EDITORS' PICK
Smart three-peats as country’s fastest mobile network – Ookla
Would the military allow me to stay this long if I’m inutile? – Duterte
In good spirits: SMDC helps farmers and residents through Kadiwa Market
Pre-order the new vivo Y20s [G] to get a free TWS earphone
65% of Filipinos say Duterte’s health should be made public – SWS
DSWD chief admits ‘slow start’ in distribution of aid in ‘NCR Plus’
MOST READ
Vico Sotto frets getting photos of ‘butt vaccination’ from Pasig dwellers
Metro Manila to have shortened curfew hours from 8 p.m. to 5 a.m. under MECQ
San Miguel Corp. continues to invest heavily in the Philippines’ future
COVID-hit Roque slams ‘un-Christian’ query on how fast he secured hospital bed
Don't miss out on the latest news and information.