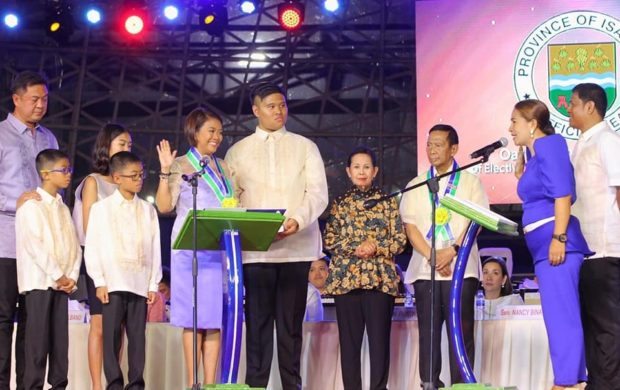 CITY OF ILAGAN—Sen. Nancy Binay took her oath of office here to symbolize what she said was her recognition of Isabela as her native province like her father, former Vice President Jejomar Binay, who hails from the town of Cabagan.

Binay said her oath-taking in this Isabela city also was to thank the province for delivering 418,817 votes to her in the May 13 elections, making her place third behind frontrunner Cynthia Villar and Imee Marcos, who had claimed the support of the so-called Solid North, or Ilocano-speaking provinces north of the country.

“I will be proud to be recognized as the senator from Isabela,” she said in a speech.

Her parents—Jejomar and former Makati Mayor Elenita and other family members—were present. Notably absent, however, were her feuding siblings—Abby and Junjun—who fought for the Makati mayoral seat in a race that Abby won.

“I will not fail you,” Binay said in her speech, addressing herself to the people of Isabela. VILLAMOR VISAYA JR. (Editor: Tony Bergonia)