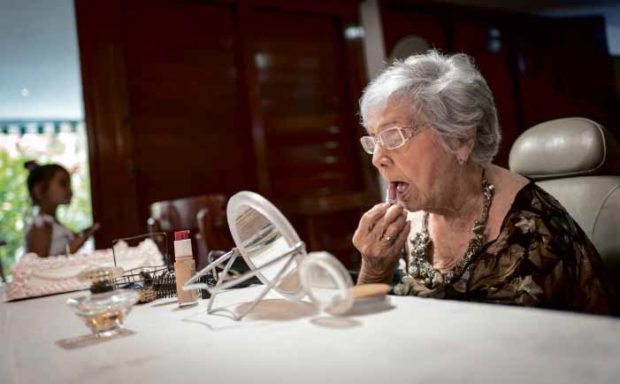 AGING GRACEFULLY Delia Barrios applies makeup for her 102nd birthday in Havana. Cuba, a socialist country where health care is free and doctors are numerous, now has a “120 Club” that encourages residents to aim for the ripe old age of 120. —AFP

HAVANA, Cuba — Looking into a mirror, Delia Barrios applies blush and lipstick—she wants to look her best for her 102nd birthday celebration, when she will be surrounded by loved ones.

Barrios is one of more than 2,000 people in impoverished Cuba who are 100 years old — a reality that has piqued the interest of experts, and led some to aim for even longer lives.

“I don’t feel like I’m this old. I have a family … that loves me a lot. That helps me to feel good,” Barrios said.

She deftly maneuvers her motorized wheelchair with her 7-year-old great-great-granddaughter Patricia on her lap.

Only two candles were placed on her birthday cake, which Barrios blew out to the applause of around 30 guests gathered in the courtyard of a building in Havana’s Playa neighborhood.

When she was in her 60s, Barrios was diagnosed with colon cancer and told she had only a year to live.

She defied the odds and then left Cuba in 1993, when the island nation was in the throes of a major economic crisis, for the United States, where her son lives.

But two decades later, Barrios suffered several falls and her doctor said she could no longer live alone.

Barrios—who says she “danced a lot” when she was younger, smoked and drank on occasion—came home and moved in with her granddaughter Yumi, who is now 59.

There are currently 2,070 centenarians in Cuba out of a population of 11.2 million — in a country where the average life expectancy is 79.5 years.

Those figures are comparable to those in many wealthier nations, despite the fact that Cuba’s average public salary is just $30 a month.

The socialist country, where health care is free and doctors are numerous, now has a “120 Club” that encourages residents to aim for that ripe old age.

“Biologically, it has been proven that humans can live for 120 to 125 years,” said Raul Rodriguez, a doctor and president of the “120 Club,” which was created in 2003 by Fidel Castro’s personal doctor, Eugenio Selman-Housein.

The club “tries to promote healthy lifestyles for all, because that’s the only way to get to that age,” Rodriguez said.

The elderly generally receive a pension of just $10 a month.

But the government has set up cafeterias for those unable to supplement that meager amount with help from family members living abroad.

Centenarians are venerated and get special attention.

“We try to provide them with specific care,” said Alina Gonzalez Moro from the Center for Research on Longevity (Cited).

“All centenarians in Havana can call us if they have a health problem and a specialist in geriatrics will immediately go see the patient.”

With a surprisingly smooth face and a mischievous look in her eye, Rigoberta Santovenia turned 102 in January.

“I didn’t think I’d get to this age … and here I am,” she said, sitting comfortably on a sofa.

Santovenia walks quickly despite her cane, and was still cooking until recently but doctors advised her to stop.

She also stopped sewing but can still thread a needle and reads the newspaper every day without using glasses.

Santovenia lives in the Vedado neighborhood with a grandson and her 68-year-old daughter Regla, who looks after her.

“It’s my duty because she’s given me everything,” Regla said. “Now I have to thank her by taking care of her.”

And she’s convinced her mother will make it to 120.

“Her great-grandmother was a slave. Slave blood seems to be stronger—that’s why she’s kept going so long.”

Experts are a bit baffled as to why Cubans are living so long.

“The family support network tends to help with longevity. We see that in Japan too,” said Robert Young, an expert at the US-based Gerontology Research Group.

But Young says Cuba may not be telling the whole truth — claims that its people are living longer than elsewhere could be “a myth that’s used for ideologic propaganda purposes.”

Vincent Geloso, an economics professor at King’s University College in Canada and author of an article on the subject for Oxford University, says Cuban doctors “have targets to reach or they’re punished.”

He suggested statistics could be manipulated as they once were in the Soviet Union, such as recording infant deaths as prenatal in order to keep down mortality rates, which would reduce the life expectancy figures.

However, “even with the worst-case scenario of manipulation, Cuba remains a place with a high life expectancy in relation to revenue.”

The conundrum could be explained by one key factor: car ownership is low in Cuba, and hence there are fewer car accidents.

He also cites food rationing during the economic crisis in the 1990s, which helped keep diabetes rates down.

“Cuba does very well in keeping people alive a long time,” he said.

“But if you offered Cubans a choice between one more year and, for example, higher salaries or a different education, what do you think they would choose?”