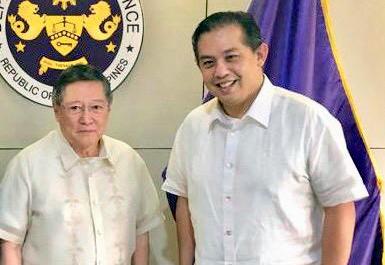 MANILA, Philippines — Leyte Rep. Martin Romualdez on Sunday vowed to align the legislative priorities of the House of Representatives with President Rodrigo Duterte’s economic agenda if he was chosen Speaker.

The Lakas-Christian Muslim Democrats president, one of the top candidates to take the helm of the House, said key leaders of the chamber had committed to act swiftly on the President’s priority economic bills to fulfill his vision of transforming the country into an upper-middle income economy by 2022.

Romualdez, who is vying for the speakership along with Marinduque Rep. Lord Allan Velasco and Taguig Rep. Alan Peter Cayetano, said he had already secured the support of many lawmakers at a caucus he organized last week.

“The House of Representatives will work double-time to act on the President’s priority bills, especially those aimed at improving the lives of our people,” Romualdez said.

He said leading congressmen all agreed to “act swiftly for the passage of laws needed to propel the country’s economic growth to new heights.”

Romualdez noted that the National Economic and Development Authority had been prodding Congress to pass around 100 new laws to implement the Philippine Development Plan for 2017 to 2022.

But only seven of the 21 bills that are included in the development plan have so far been passed by Congress.

Topping the priority list of the 18th Congress, according to House leaders, are the 2020 national budget and funding bills for the President’s infrastructure projects.

“We know that we face a herculean task, but nothing is impossible with a House united. The multiparty coalition is committed to align our efforts with the President’s plans,” Romualdez said.