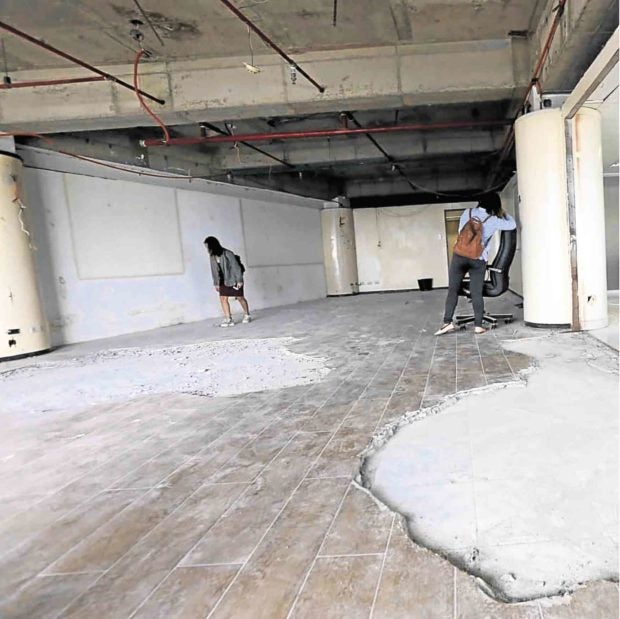 ALL GONE Former Cebu City Mayor Tomas Osmeña ordered the removal of tiles, ceiling and other office furniture in his office before turning them over to Mayor Edgardo Labella. JUNJIE MENDOZA

This was after his predecessor, former Cebu City Mayor Tomas Osmeña, literally took the entire mayor’s office with him when he vacated his post.

On Friday, employees and visitors at the mayor’s office were surprised on seeing the bare rooms at the eighth floor of the executive building.

The glass dividers were gone along with the ceiling and some ceramic tiles. The kitchen tiles were also gone. The washroom was also left with raw concrete as all tiles had also been taken out.

According to Bimbo Fernandez, Osmeña’s executive assistant, the former mayor owns the fixtures and furniture in the office.

In 2016, Osmeña asked for P2 million for office renovation but was denied by the opposition-dominated city council. Osmeña renovated his office using his personal funds, Fernandez said.

The camp of Labella said it was contemplating on filing a case against Osmeña and his staff for the alleged destruction done at the mayor’s office.

In his speech during the oath-taking ceremony on Sunday, Labella said he would have to work at his old office while the mayor’s office undergoes renovation.

“I thank Vice Mayor Michael Rama for allowing me to use his office for one week. We all know what happened to my office,” said Labella.

After a week, Labella will transfer to the senior citizens’ office on the ground floor to give way to Rama, who temporarily holds office at the social hall of the legislative building.

“What was done to the mayor’s office was clearly a destruction of government property,” Labella said.

“The ruin of the city mayor’s office is hard to believe. It’s a shocker. But as I reflect on it, perhaps it is no more than a microcosm of the way someone has left an entire city in shambles,” he said.

Labella said his office would undergo renovation as it is where he will entertain dignitaries and other visitors.