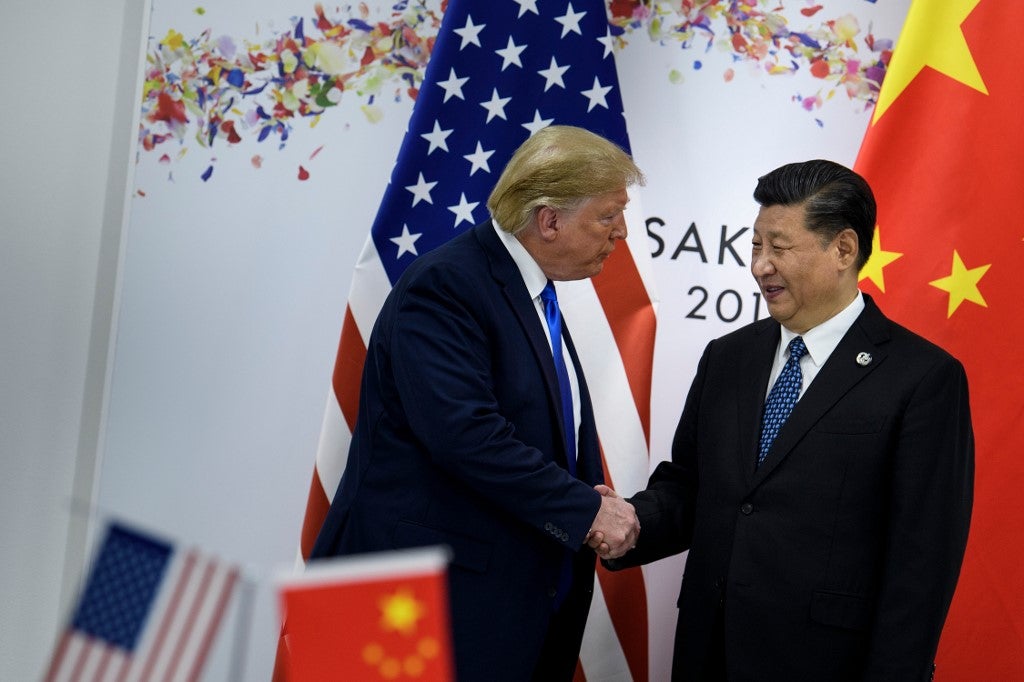 China’s President Xi Jinping (R) greets US President Donald Trump before a bilateral meeting on the sidelines of the G20 Summit in Osaka on June 29, 2019. (Photo by Brendan Smialowski / AFP)

SEOUL — US President Donald Trump on Sunday hailed trade talks with his Chinese counterpart Xi Jinping as “far better than expected” and vowed to hold off on further tariffs as negotiations continue.

“The quality of the transaction is far more important to me than speed. I am in no hurry, but things look very good!” he tweeted.

The ceasefire that halts damaging trade frictions came after a hotly anticipated meeting between the leaders of the world’s top two economies on the sidelines of the G20 summit.

Trump on Saturday called the meeting in the Japanese city of Osaka “excellent” and said, “We are back on track.”

He confirmed that Washington had committed to not imposing any new tariffs on Beijing’s exports.

“We won’t be adding an additional tremendous amount of $350 billion left which could be taxed or could be tariffed. We’re not doing that, we are going to work with China on where we left off to see if we can make a deal,” Trump said at a press conference.

“We will be continuing to negotiate.”

He added in a tweet on Sunday that China had agreed to buy “large amounts of agricultural products from our great Farmers.”

“I had a great meeting with President Xi of China yesterday, far better than expected,” he said. “Importantly, we have opened up negotiations again with China as our relationship with them continues to be a very good one.”

The outcome was likely to be seen as a win for avoiding any new tariffs.

“The base case scenario was met at G20 and while we are no worse for wear, let’s see what the G20 hangover brings,” said Stephen Innes, market analyst at Vanguard Markets.

Trump struck a conciliatory tone from his arrival in Japan for the summit, despite saying China’s economy was going “down the tubes” before he set out for Osaka.

He said he was ready for a “historic” deal with China as the leaders kicked off their meeting, and Xi told him that dialogue was better than confrontation.

In their final statement, the G20 leaders admitted that “most importantly, trade and geopolitical tensions have intensified,” echoing hard-won language from their finance ministers at a meeting earlier this month.

There were few more concrete details about the closed-door discussions but Trump suggested a potentially softer position on the Chinese telecoms firm Huawei, which has been a sticking point in the trade war.

He said US companies could sell equipment in cases “where there’s no great national security problem” with the firm, which Washington fears poses security risks.

But it was not immediately clear whether the comments marked a material change on Huawei, which has essentially been barred from accessing crucial US technology.

The tete-a-tete between the US and Chinese leaders — the first since the last G20 in December — cast a long shadow over this year’s gathering in Osaka.

Protectionism and tariffs wars have proved a major headwind for a world economy already buffeted by geopolitical tensions and Brexit.

On Friday, the European Union and the South American trade bloc Mercosur offered a ray of trade hope by sealing a blockbuster deal after 20 years of talks, with European Commission President Jean-Claude Juncker hailing it as a “strong message” in support of “rules-based trade”.

Trade has proved far from the only contentious issue on the summit table, with climate change another major sticking point.

Negotiations ran into the night, with US opposition proving difficult to overcome.

In the end, a deal of sorts was reached, with 19 members — minus the United States — agreeing Saturday to the “irreversibility” of the Paris climate deal and pledging its full implementation.

The language in the final statement after the Osaka summit mirrored that agreed during last year’s G20 but this did not satisfy French President Emmanuel Macron who urged leaders to go “much further” on climate change.

Trump has dominated the headlines from the summit, and once again caught observers by surprise by tweeting early Saturday that he was open to meeting North Korea’s Kim Jong Un while in South Korea this weekend.

“If Chairman Kim of North Korea sees this, I would meet him at the Border/DMZ just to shake his hand and say Hello(?)!,” he wrote.

He later said he would be happy to step over the border into North Korea, which would represent an extraordinary move for a US leader after decades of enmity between Washington and Pyongyang.