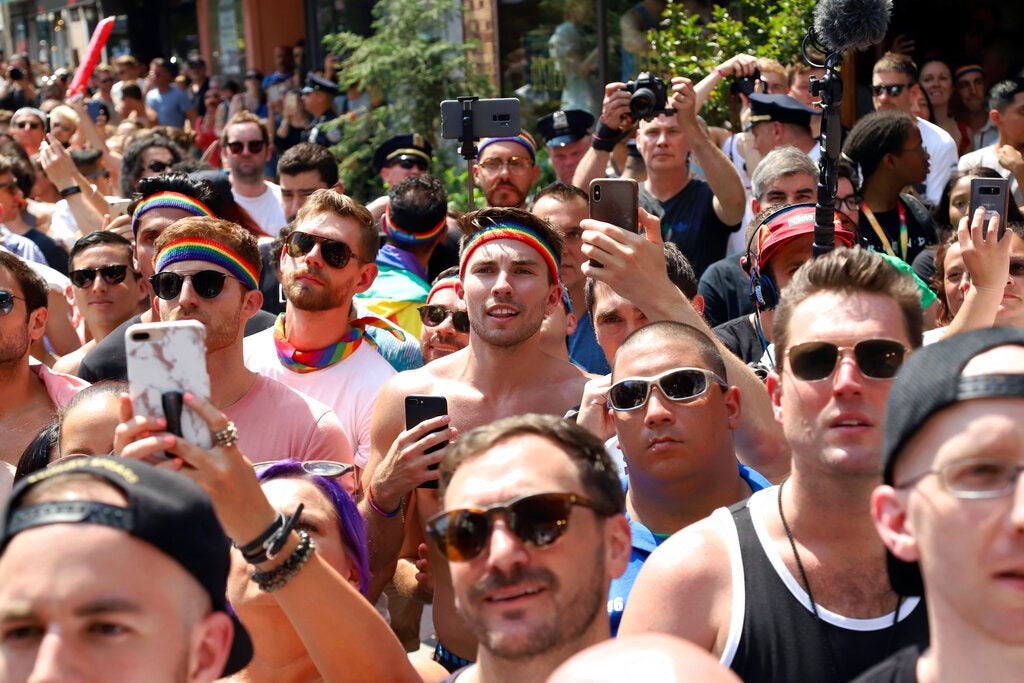 Crowds participate in Stonewall Day honoring the 50th anniversary of the Stonewall riots, hosted by Pride Live and iHeartMedia, in Greenwich Village on Friday, June 28, 2019, in New York. (Invision/AP)

NEW YORK — Thousands of people converged Friday on the Stonewall Inn for the 50th anniversary of the rebellion that catalyzed a movement for LGBTQ liberation, marking the milestone with celebrity performances, speeches and personal reflections.

People from New York and afar came to take photos and share in the legacy of the gay bar where patrons resisted a police raid, sparking protests and longer-term organizing that made the cause considerably more visible.

“Fifty years ago, people stood up for their rights, and look where we’re at now. We’ve got flags all over the city,” said Richard Walker, 58, an airline worker from New York. “I’m getting goosebumps just really thinking about it.”

With the modern incarnation of the Stonewall Inn as the focal point, the day’s celebrations included music, speeches and an evening rally. Lady Gaga, Whoopi Goldberg, Alicia Keys, drag performers and other artists at the advocacy organization Pride Live’s Stonewall Day Concert addressed a crowd that stretched for blocks on a nearly 90-degree afternoon.

“This community has fought and continued to fight a war of acceptance, a war of tolerance,” Lady Gaga said. “You are the definition of courage.”

Robert Beaird traveled from Dallas to attend the Stonewall anniversary events a couple of years after coming out in his 50s.

“I just kind of hid who I was for my whole life, and then within the last two years, I’ve been going through this kind of cathartic experience of accepting myself,” said Beaird, 53, who had been married and fathered children. “Just to be here with all these people is pretty amazing.”

Jocelyn Burrell isn’t gay, but she made her way to the Stonewall Inn because she was struck by how welcoming it was when she stopped in there years ago, and she feels a sense of common cause with its place in history.

Friday’s events were kicking off a big weekend of Pride festivities in New York and elsewhere. In New York, Sunday’s huge WorldPride parade — and an alternative march intended as a less corporate commemoration of Stonewall — also will swing past the bar.

Cities around the world began celebrating Pride on Friday. Participants in a march in the Philippines went by the presidential palace in Manila, waving placards as they marked the 25th year since the first such gathering.

The Stonewall Inn is now a landmark and part of the Stonewall National Monument, but in 1969, it was part of a gay scene that was known, yet not open. At the time, showing same-sex affection or dressing in a way deemed gender-inappropriate could get people arrested, and bars had lost liquor licenses for serving LGBTQ customers.

The police raid on the bar began early the morning of June 28, 1969. The nightspot was unlicensed, and the officers had been assigned to stop any illegal alcohol sales.

Patrons and people who converged on the bar on Christopher Street resisted , hurling objects and at points scuffling with the officers.

Protests followed over several more days. A year later, LGBTQ New Yorkers marked the anniversary of the riot with the Christopher Street Liberation Day March. Thousands proudly paraded through a city where, at the time, LGBTQ people were largely expected to stay in the shadows.

“We understand we’re the innkeepers of history,” said current co-owner Stacy Lentz. “We really feel like the fire that started at Stonewall in 1969 is not done. The battleground has just shifted.”